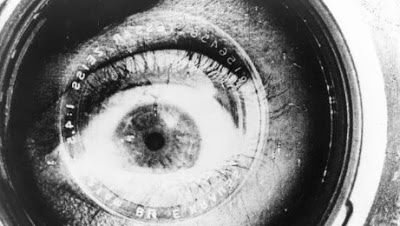 Critics voting in Sight & Sound's most recent poll to find the top 100 films of all time placed this amazing Soviet silent documentary - an experimental city symphony capturing a day in the life of Moscow, Odessa and Kiev by Dziga Vertov - at number eight.

I have to confess I'd never seen it before and only have now thanks to its recent screening on Sky Arts, a channel owned, ironically, by that ultimate embodiment of ruthless capitalism, Rupert Murdoch. However, I'm grateful to the Aussie media tycoon because Vertov's film is an overwhelming sensory experience, a violent, avant-garde barrage of images of Russian city folk cheerily going about their day's work like good Bolsheviks engaging energetically with the modern machine age.

Completely foregoing conventional character-driven narrative, Vertov begins with members of an orchestra taking their seats in a theatre before showing us babies being delivered in a maternity hospital, trams flying down cobblestone streets, horses heaving cartloads of coal in a subterranean mine shaft, clanking steam engines roaring down the tracks, telephone operators taking calls, beauticians cutting hair and giving manicures, cigarettes being rolled, newspapers being printed, shoes being shined, swimmers diving into the harbour, a Chinese magician performing tricks and much else before dusk finally settles.

Walter Ruttman may have had a similar idea with his Berlin: Symphony Of A Metropolis (1927) but it's hard to imagine a more harmonious marriage of theme and execution than Vertov manages to achieve here. 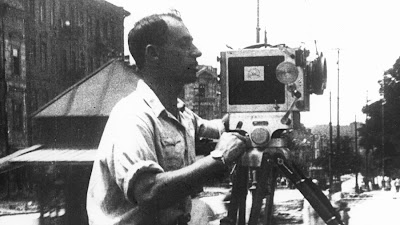 The director, who began his career shooting Kino-Pravda ("film truth") propaganda newsreels with his brother Mikhail Kaufman, occasionally appears in the film with his trusty camera and tripod at the ready, sometimes perched on top of a building and once on the back of a speeding carriage literally chasing an ambulance, implying that cinema can take us anywhere. His editor and wife, Elizaveta Svilova, also appears, examining and splicing the negatives from the reels he hands her, a detail that makes Man With A Movie Camera one of the silver screen's first meta-narratives.

As well as a patriotic ode to the glory of the Soviet Union and a record of the health, humour and capability of its working people, Vertov's film is also highly optimistic about technology and the potential it promises. He shows us enormous iron behemoths making light work of mammoth tasks like mass transport and mass production and delights in the cinema as a device through which the world can be reflected back at itself. Vertov's movie camera is a box of tricks, allowing him to toy with slow motion to capture the muscular athleticism of a female discus thrower, draw parallels between a typist and a pianist through rapid intercutting, play chess backwards or suggest similarities between a woman's flickering eyelids and the opening and closing of window shutters. The director even plays with surrealism, superimposing his own image into a punter's glass of beer.

With so many pictures and associations crammed into 68 minutes, watching Man With A Movie Camera is positively dizzying. The version I saw had a new score by Michael Nyman from 2002, its hectic pace perfectly matching Vertov's exhaustive (and exhausting) footage.
Posted by Joe at 20:14