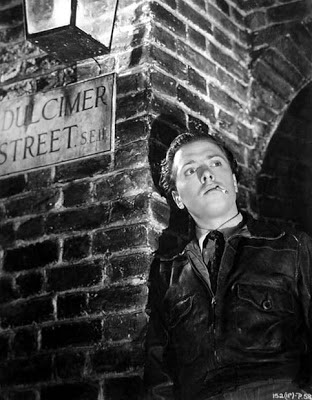 An unusual, character-driven Christmas melodrama from the Sidney Gilliat and Frank Launder stable, London Belongs To Me deals with the troubled life of Percy Boon, a young mechanic on trial for murder at the Old Bailey in 1938, and the efforts of his fellow lodgers at a Kennington boarding house to rally round and petition Whitehall on his behalf. Dickie Attenborough stars as poor Percy a year on from his menacing portrayal of Pinkie Brown in the Boulting Brothers' Brighton Rock and again takes on a character whose guilt is firmly established. Percy has accidentally killed his ex-girlfriend Myrna (Eleanor Summerfield) by pushing her from a moving car in a moment of blind panic after speeding past a police checkpoint. The vehicle in question has been stolen by Percy so that he can respray it, sell it on and use the funds to win the heart of neighbour Doris Josser (Susan Shaw), the object of his affections. Myrna, jilted by Percy and jealous of Doris, had only wanted a ride home.

Attenborough does well as the cocky but well-meaning youth in over his head and is ably supported by the likes of Shaw, Summerfield, Joyce Carey and Hugh Griffiths plus Wylie Watson and Fay Compton as Mr and Mrs Josser, Doris's parents, who spend their savings on the 'Reprieve Percy Boon' campaign knowing that all it guarantees them is an uncertain future. But, once again, it's Alastair Sim who steals the show as 10 Dulcimer Street's newest arrival, Henry Squales, a phoney medium who affects a world weary sigh in his speech and is prone to staging bogus seances and pretending to be in contact with the spirit realm, channeling the departed souls of dead lamas for an audience of enraptured housewives. Sceptic Jan Byl (Fabia Drake), however, is as unimpressed by Squales' trances as she is by the sandwiches: "If this is lobster paste, I'm the Flying Dutchman". Quite. In a part that must surely have influenced Alec Guinness's Professor Marcus in The Ladykillers (1955) and in turn pays homage to Hitchcock's The Lodger (1927), Sim's shadow looms large over the front door before he charms his way in and seduces the widowed landlady, Mrs Vizzard (Carey), to save on rent, only for his recent past, faking photographs of ghosts in Brighton, to catch up with him. Other pleasing turns here include Ivy St Helier as ageing hatcheck girl and minor confidence trickster Connie Coke and Stephen Murray as the magnificently fusty revolutionary socialist Uncle Henry, who spends his days cycling around South West London grumbling about the "international situation" and the fecklessness of his fellow Brits. 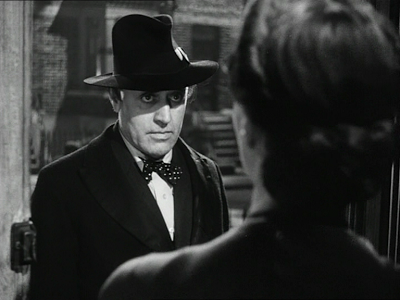 Ultimately, however, London Belongs To Me does not hang together at all well. This is largely a failure of tone. Our protagonist is, after all, guilty of manslaughter, if not murder, and there's no getting away from the gravity of his predicament: Percy will be hung if convicted, leaving his dear, sickly mother (Gladys Henson) to die of sorrow. No matter how amusing the tenants are, Percy's imminent execution is a grim spectre to leave lurking in the background. This problem was spotted by contemporary reviewers like Dilys Powell in the Sunday Times, who liked the film but complained that, "the transitions from mood to mood are too roughly made, and the incongruity results, not in heightening the sense of [Percy's] tragedy, but in making the spectator feel ill at ease". This point-of-view was echoed by the September 1948 issue of Monthly Film Bulletin, which also praised Gilliat's work but argued that it "extracts too much fun from an unfunny business". Having not read Norman Collins' source novel, I was also left bemused as to whom the titular pronouncement refers to: the screenplay by Gilliat and J.B. Williams provides no answer. Despite some rich character performances then, it's hard to disagree about the film's faults or, indeed, with Powell's conclusion: "London Belongs To Me does the British cinema a great deal of credit".
Posted by Joe at 21:40