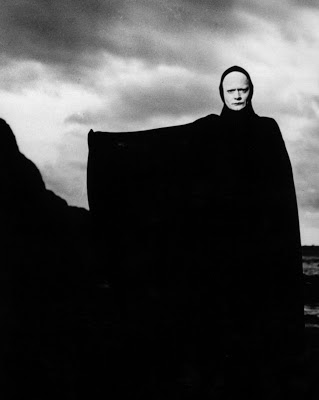 "And when the Lamb had opened the seventh seal, there was silence in heaven".
-Revelation 8:1

Returning home from the Crusades to find the Danish coast riddled with the Black Death, a knight and his squire rest on a pebble beach, weary from their arduous journey. The men have been away at war in the Holy Land for a decade and have been left spiritually drained and disillusioned by their experiences. While the earthy Jöns (Gunnar Björnstrand) dozes faces down on the shore, melancholy warrior Antonius Block (Max von Sydow) looks up from his chess set and out across a dark and turbulent sea to find the Grim Reaper (Bengt Ekerot) staring back. Block engages the spectre in a game with his own soul at stake and wins a temporary reprieve, which he then pledges to use to perform one last meaningful gesture to make amends for the life he believes he has squandered. Pushing on, Block and Jöns encounter a painter of morbid church murals, a troupe of travelling actors, a mute, a cuckolded blacksmith, a corrupt theologian and a mob of religious fanatics hysterical in their persecution of "witches". 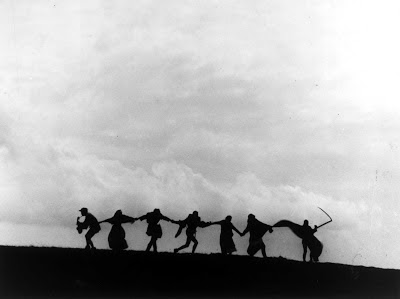 Like many film fans of my generation, I first encountered Ingmar Bergman through the utterly excellent parody of The Seventh Seal in Bill & Ted's Bogus Journey (1991), in which the titular dudes challenge Death to a selection of modern board games including Battleships, electronic football and Twister. The Swede's crisis of faith allegory - originally conceived in 1954 as Wood Painting, a play for his drama students at Malmö City Theatre to perform - undoubtedly remains the director's best-known and most iconic work, although it is often lazily and unfairly characterised as bleak and humourless.

On the contrary, The Seventh Seal is filled with warm moments. Block's picnic of wild strawberries and milk with the jesters Mia (Bibi Andersson) and Jof (Nils Poppe) makes for an idyllic interlude, the bawdy love triangle concerning Plog (Åke Fridell) is essentially a midsummer night's sex comedy (to borrow a phrase from Bergman acolyte Woody Allen) while the smirking, gallows humour of Jöns provides a neat counterpoint to his master's depressive agonising over the meaning of life in an ailing universe in which the "silence of God" is all too deafening. Block's morose concerns were nevertheless shared by his director, who used the film as a vehicle for the discussion of his own anxieties about the possibility of maintaining a sincere faith in the existence of a benevolent, omniscient creator in a post-Holocaust age of nuclear warfare.
Posted by Joe at 22:36