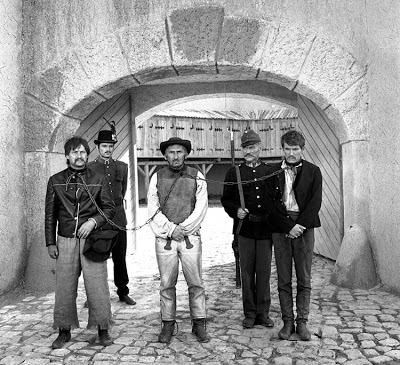 The literal translation of Szegénylegények, the title of this stark Goulash Western from Hungarian auteur Miklós Jancsó, is “The Hopeless Ones”, which gives a much clearer idea of the mood of the piece you’re in for.

Set 20 years on from Lajos Kossuth’s revolutionary charge against the ruling Austrian forces in 1848, Jancsó’s film centres around one of the detention camps established on the Hungarian Puszta that was still being used for imprisoning dissenters after the signing of the Great Compromise between the aristocracies of Austria and Hungary in 1867, unifying the empire under a dual monarchy. The Hungarian troops manning the station in question are seeking to single out the remaining members of a guerrilla faction led by bandit king Sándor Rózsa from the latest crop of suspects they’ve arrested. Having interrogated and intimidated several peasants and farmers without success, they turn to János Gajdar (János Görbe), a known murderer. As in John Hillcoat’s more recent Outback bloodbath The Proposition (2005), the authorities make a deal with János granting him his freedom if he can help them to ensnare the outlaws. With little choice but to become an informant, János is ultimately slain by his fellow inmates while in solitary confinement. As only two cell doors were deliberately left unlocked to allow for this eventuality, only two men could have been responsible, leading the guards neatly to the real members of Rózsa’s gang. The culprits are finally tricked into revealing themselves with the promise of a pardon and a post in the cavalry, after which they are swiftly executed. 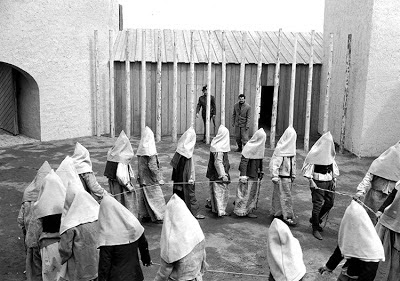 Most shocking during a scene in which a woman is stripped and forced to run naked through a gauntlet of soldiers who thrash her with sabres as punishment for daring to supply the prisoners with food – a sight so horrible that several of the men throw themselves from the ramparts in horror as she dies from her wounds – Jancsó’s brooding historical drama is a landscape painting of oppression with universal significance. The frantic desperation of János to save his own skin is palpable and the half-hearted manner in which the prisoners submit to being shackled, bound and hooded is deeply unsettling (for modern audiences, this spectacle will inevitably call to mind the abuse of Iraqi prisoners during the War on Terror). These men accept their fate because there is nothing else, as horrible a prospect as you could wish for. Hungary had been unceremoniously shunted from the Habsburgs to Stalin in the intervening years between the period in which The Round-Up is set and that in which it was made and the film is the product of a world in which tyranny has become a mundane reality of everyday life. The director was forced to distance himself from the idea that The Round-Up was an implicit allegory for the repressive climate that followed the Hungarian Uprising of 1956 but, of course, it was. Sergio Leone was a great admirer of Jancsó and it’s easy to see how his widescreen, wind-dashed landscapes, thoughtful tracking shots and close-ups on grizzled, heavily moustachioed faces influenced the latter’s contemporaneous Dollars trilogy (1964-66). For that matter, you can also see Jancsó's legacy at work in the austere, doom-laden cinema of his compatriot and modern counterpart Béla Tarr.
Posted by Joe at 12:32