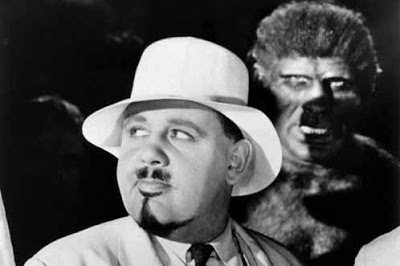 Charles Laughton makes for an amused and Satanic Dr Moreau in Erle C. Kenton's classic horror for Paramount based on the enduring late-Victorian science fiction nightmare by H.G. Wells. Laughton's  Moreau is a graceful butterball perspiring lightly from the tropical heat in a linen suit and revelling in his infamy in exile. He proudly shows off his giant asparagus trees and mercilessly thrashes his grotesque "manimal" creations with a bull whip to the growing disgust of shipwrecked interloper Edward Parker (Richard Arlen). This sadistic and immoral proprietor of the "House of Pain" thinks nothing of carving up live animals and grafting their limbs onto the bodies of restless natives and thereafter sleeps well beneath a mosquito net, ignoring their primal screams into the jungle night. The sneer of barely repressed lust on his face as he stands in the shadows watching Lota (Katherine Burke), a panther woman and his greatest triumph, interact with Parker, clearly hoping for much more than just a flicker of sexual attraction between the two, is deeply perverse and unforgettable once seen. As biographer Charles Higham summarised: "Moreau in Charles's hands is much deeper than H.G. Wells could suggest: a perversion of a British Colonial administrator, and at the same time a symbol of Colonial oppressiveness... Above all, Charles suggests, as is so often the case in other films, the loneliness of evil, the fact that it eats on itself."

Wells composed his tale in 1896 to prey on contemporary anxieties about the darker ramifications of Darwinian evolutionary theory and abundant fears that mankind could regress to a bestial state. The Island Of Lost Souls in a sense updates the novel's concerns for the age of post-World War I body horror*, placing it in a similar realm to Tod Browning's Freaks, which was released the same year and with which it shares a leading lady, Leila Hyams. Even more darkly, it also essentially predicts the horrific human experiments shortly to be carried out by Nazi physician Josef Mengele at Auschwitz. The script was written by Browning associate Waldemar Young with Philip Wylie and the latter would be called in by Carl Laemmle to help doctor the screenplay for another Wells adaptation the following year, Universal's The Invisible Man, starring Claude Rains and directed by James Whale. 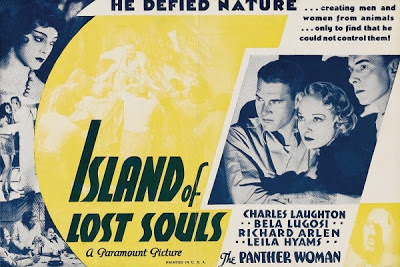 Laughton is unquestionably the highlight of Kenton's adaptation (despite the actor not taking to his director during the location shoot on Catalina Island and being revolted by the premise as a lifelong animal lover), although the steamy, feverish atmosphere of the South Pacific is well captured by cinematographer Karl Struss, who had worked on F.W. Murnau's Sunrise (1927). The monstrous creature effects also remain understated and impressive, with Bela Lugosi almost unrecognisable behind a bushel of hair as the Sayer of the Law ("Are we not men?!"). The grotesque make-up may have been the reason that the film was rejected outright by the British Board of Film Censors (BBFC) in 1933 (their records are vague) and only shown in the UK for the first time in 1958 with heavy cuts. It's tempting to compare the hacking and slashing done to this beautiful work of art by the censors with Moreau's grotesque vivisection experiments. The full uncut version only received a video release in 1996 and Kenton's film finally got the restoration it deserved this year courtesy of a spanking new DVD package from Eureka!. I just saw it at the BFI as part of an Uncut season to mark the centenary of the BBFC and can assure you that this bizarre curiosity positively glows on the big screen.