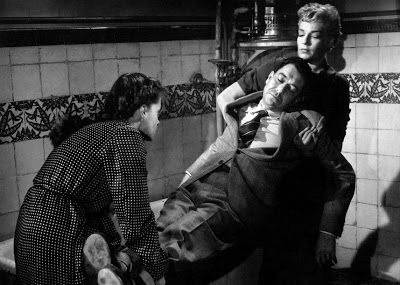 School teacher Nicole Horner (Simone Signoret) drowns her abusive lover Michel Delassalle (Paul Meurisse) in a bathtub after conspiring with his wife Christina (Véra Clouzot) in Henri-Georges Clouzot’s marvellous psychological horror. The director famously snatched the rights to Pierre Boileau and Thomas Narcejac’s 1952 novel, Celle Qui N'Était Plus, from under the nose of Alfred Hitchcock and subsequently included a number of nods to the Master of Suspense in the finished film. The most obvious of these is the very Hitchcockian black comedy of the couple carping about the noise of the bath filling up with water and “drowning out” the radio quiz show they are trying to listen to as the women carry out the gory deed on the floor below. The great man’s stout shadow also looms over the tense scene in which the handle snaps off the wicker hamper the accomplices are using to transport Michel’s cadaver from the apartment and that in which a drunken solider attempts to “Hitch” a ride in their improvised hearse. The anti-spoiler message at the film’s close cautioning audiences not to ruin the experience for friends who haven’t yet seen it anticipates the Englishman’s attempt to ban tardy patrons from arriving late to screenings of Psycho in 1960. Hitch may have missed out on Les Diaboliques then but he made sure he got there first next time around, turning Boileau and Narcejac’s 1954 follow-up D’Entre Les Morts into a little film called Vertigo (1958). 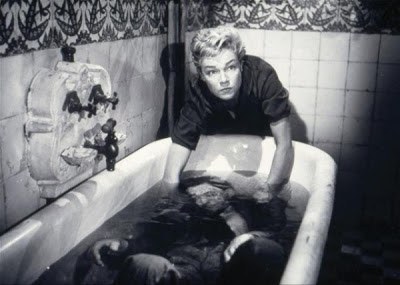 In Les Diaboliques, Clouzot superbly establishes a creeping sense of unease and malaise at the French provincial boarding school owned  by Christina but presided over by the snide and tyrannical Delassalle. Echoing Jean Vigo’s celebrated comedy Zéro De Conduite (1933), the pupils talk just as savagely as schoolboys really do and obviously come from far wealthier homes than their teachers. What’s more, they know it. Delassalle meanwhile bullies Monsieur Drain (Pierre Larquey) out of his nightly glass of wine and aggressively forces his saintly, birdlike wife to swallow the rotten fish the canteen buys cheap and dishes up without relish to save money. No one dares question the head’s authority or indeed Nicole’s wearing sunglasses at dinner, obviously concealing a black eye. Delassalle’s public flaunting of his relationship with Nicole in front of the children is as utterly queasy as it is humiliating for Christina, a kindly former nun from Venezuela who has inherited the property and whom Michel has clearly married for her money. Only a man as horrid as Michel could drive Christina to conspire in murder and his forcing himself upon her sexually appears to be the final straw. 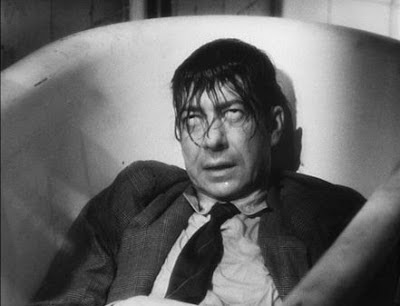 After establishing this corrupt state of affairs, Clouzot shows us the murder in near real-time, making expressionistic use of sound as a train whistle announces the victim’s arrival in town and relishing the details of the brass weight and the doped bottle of Johnnie Walker. From then on, the director switches seamlessly from crime melodrama to supernatural thriller as Michel’s corpse disappears from its watery grave in the murky depths of the school swimming pool. Signoret is particularly well cast for the Spanish-style ghost story that follows (complete with Charles Vanel’s rationalist detective on hand to raise doubt), having starred in an adaptation of Emile Zola’s Thérèse Raquin two years earlier and hence boasting prior experience of being haunted by the dripping spectre of a drowned man on celluloid. Signoret is tough throughout in the more masculine role but Véra Clouzot, the director’s wife, provides an impressive study in fear as a good woman whose frail heart and Catholic guilt are being viciously preyed upon. Tragically, Véra Clouzot herself would die of a heart attack in 1960, a fact that undeniably gives Les Diaboliques an additional ghoulish frisson today.
Posted by Joe at 21:24