Although this W.C. Fields comedy for Paramount is one of the old rascal’s finest outings, it’s also unquestionably his saddest film. Fields often played oppressed husbands but his familiar blustering con artist never came close to surrendering to despair, always finding consolation in the bottle and the support of a doughty daughter when matters took a turn for the worse. But that finally comes to pass here and I can think of few more quietly devastating scenes in movies than that of Fields’ hapless inventor Sam Bisbee composing a suicide note and planning to poison himself with iodine on the train home rather than face his wife and child in disgrace. Fortunately, a fairy godmother intervenes in the person of the lovely Princess Lescaboura (Adrienne Ames) but the thought that even as resilient a cove as Fields can’t bear to live any more is an upsetting one indeed.

The reason for this aspiring Edison’s depression is the recent humiliation he’s suffered in front of the National Tire Company’s board of directors when attempting to demonstrate his most prized invention – a puncture-proof automobile tyre. Having previously installed four of these babies on his own car, Bisbee begins brazenly firing bullets at the vehicle while the suits look on, little realising that the rubber he’s busy deflating belongs to someone else’s jalopy – his own having been towed away by the cops while he was pressing the flesh inside. Things are bad at home too. Abigail (Louise Carter), his wife of 20 years, is embarrassed and aggravated by his every move – there’s a superb bit of business in which Fields drives her nuts by getting himself, his straw hat and the shoes he’s carrying hopelessly tangled up in some ornamental curtain ropes – while his daughter (Joan Marsh) is involved with a man whose family are appalling snobs. This suitor is played, incidentally, by the unbelievably square jawed Larry “Buster” Crabbe – an Olympic gold medallist swimmer who would go on to star as Tarzan, Buck Rogers AND Flash Gordon before the decade was out. Despite these troubles, help is at hand for Bisbee as the sympathetic princess turns the town of Crystal Springs upside down to her friend’s advantage and puts the ghastly Mrs Murchison (Kathleen Howard) well and truly in her place. 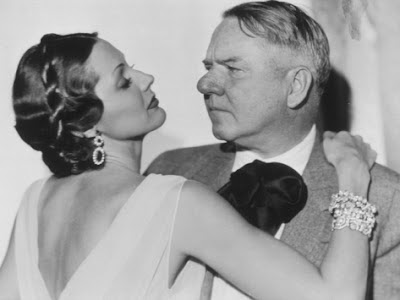 Directed by the prolific Erle C. Kenton, who made The Island Of Lost Souls for the studio with Charles Laughton in 1932, You’re Telling Me! ends up being a damning indictment of provincial snootiness and hypocrisy, embodied by the strident Howard as well as Fields regulars Nora Cecil and Elise Cavanna as the snide town gossips. Disapproving prospective in-laws were a common Fieldsian theme, also present in the likes of The Old Fashioned Way (1934) and Poppy (1936). Another recurring motif present here is the concluding golf scene with Tammany Young as an oafish caddy, essentially a remake of W.C.'s 1930 RKO short The Golf Specialist but priceless all the same. Perhaps the highlight here though is the film’s contrived but spectacular runaway ostrich chase, Fields trying frantically to hold onto the bird's leash as it sprints off down the street for no good reason whatsoever. Bisbee’s homemade inventions are also hilarious, including an attachment for guiding a drunkard’s key to the front door when under the influence, a double necked milk bottle for twins and the “murder chair”, a burglar trap that might have come in handy in the opening scene of The Man On The Flying Trapeze (1935). Fields glugging more than just a nip from the mayor’s “something on the hip” is my favourite scene though. As soon as you catch this happy sight, you know that all's right with the universe once again.
Posted by Joe at 21:16