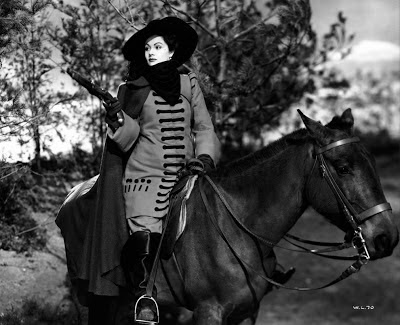 A jewel of the “Gainsborough Gothic” cycle identified by critic Francis Wyndham, Leslie Arliss’s The Wicked Lady was a box office smash in 1945 and stars the ravishing, raven-haired Margaret Lockwood as Barbara Skelton, a 17th century aristocrat who takes to the road to become a highwayman as a means of escaping provincial boredom. A lusty romantic melodrama filled with bawdy humour, lavish costumes and a dashing James Mason, The Wicked Lady was clearly made to cater to the fantasies of a predominantly female wartime audience of land girls and munitions factory workers whose husbands and lovers were away at war. In the US, films like 20th Century Fox's Jane Eyre with Orson Welles were churned out for much the same market. However, as Graham Fuller of Sight & Sound recently pointed out, the plunging cleavages of The Wicked Lady’s heroines, which upset American censors almost as much as Jane Russell’s joyous jugs in The Outlaw (1943), would hardly have deterred the menfolk.


Although pre-feminist (taken from Magdalen King-Hall’s novel of the same year), the film presents us with a female protagonist who is sexually liberated and simply takes whatever her heart desires – starting with Sir Ralph (Griffith Jones), the fiancé of her Plain Jane cousin Caroline (Patricia Roc), an impulse that leads Barbara Skelton almost casually towards a life of crime. The Wicked Lady’s frankness about sex comes as something of a surprise when one is accustomed to the generally more coy output of the period. Barbara’s bridesmaids leer, giggle and exchange innuendos as she prepares for her wedding night while her hated sister-in-law, Lady Henrietta Kingsclere (Enid Stamp Taylor), bites her lip hungrily at the very thought of being accosted by Mason’s notorious Captain Jerry Jackson. The latter himself is no slouch on this front: “Oh just one more!” cries Barbara as she hurriedly unloads gold bullion from a coach they’re robbing; “I’ve heard you say that in other circumstances...” he smirks. 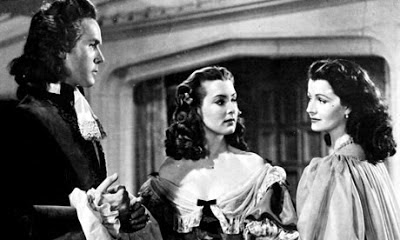 The unjustly forgotten Lockwood is captivating and turns in a boisterous central performance as a woman who ultimately murders three men over the course of the picture - British cinema wouldn't ask us to root for a loveable serial killer again until  Louis Mazzini dug out the family tree in Kind Hearts & Coronets (1949). There’s excellent support from Roc, Stamp Taylor, Francis Lister and the under-used Martita Hunt and Jean Kent. The other male leads – Jones and Michael Rennie – are more forgettable but Mason is great fun: “By my stars... So it’s a skirt we have in the saddle!” He doesn’t always seem comfortable – as though he’s not entirely convinced that he doesn’t look ridiculous – especially in his scenes with buxom doxies at the debauched Leaping Stag tavern, but that only adds to the charm of the production. His merry ascent to the gallows at Tyburn is as funny as his return from the grave to rape Barbara is shocking. A fascinating and highly entertaining caper, The Wicked Lady gallops along at a lively pace thanks to some sharp editing from future Hammer horror director Terence Fisher. Arliss shows some real flair behind the camera too, shooting from inside a lit fireplace at one point so that its flames appear to lick at Barbara while her servant Hogarth (Felix Aylmer) lectures her on eternal damnation and recoiling backwards out of the window at another as an aghast Kit (Rennie) finally rejects the dying adventuress for her villainous ways. An ice skating scene on the frozen Thames is also inventively staged. Overall, a splendid romp.
Posted by Joe at 22:46