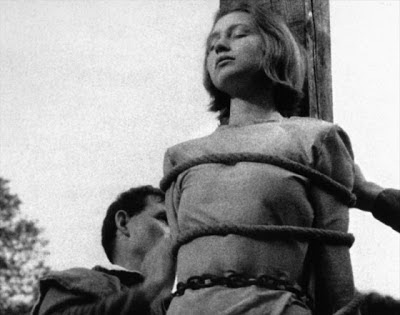 Now I know how Joan of Arc felt. Robert Bresson shot this documentary-style reconstruction of the final days of the legendary French martyr using the actual minutes from her heresy trial at the hands of Catholic bishops in 1431. The strictness of the parameters Bresson set himself in sticking to these remarkable historical records meant there was no room for epic battle scenes or spectacular sets and ensured a tight focus on Joan's emotional response to persecution. As was his custom, Bresson hired a cast of largely non-professional actors in order to make the film more naturalistic and because of his loathing for actorly artifice, a tactic also employed by Pier Paolo Pasolini in his Gospel According To St. Matthew (1964). To this end, future novelist and academic Florence Delay makes for an utterly mesmerising "Maid of Orléans", defiant in the face of her inquisitors at Rouen and unshakeable in her conviction that the voices in her head are those of St. Catherine and St. Margaret bearing messages from God. Delay's Joan does not recognise the authority of the ecclesiastical court convened to convict her and only flatly responds to the questions of Bishop Cauchon (Jean-Claude Fourneau, a surrealist painter by trade). She dies assured that the hypocritical clergymen who condemn her do not represent the will of her maker and leaves behind only a pair of smouldering iron shackles, a symbol of the meaninglessness of the church's terrestrial tyranny over a true believer. Her execution is a confirmation, not a tragedy.