What a crying shame it is that this haunting exercise in Southern Gothic expressionism turned out to be the only feature Charles Laughton would ever make as director, for it is truly a masterpiece. Disappointed by the negative critical response and indifferent box office, the great actor never again stepped behind the camera and a huge talent was lost to filmmaking.


Knowingly theatrical and almost Biblical in tone, The Night Of The Hunter is a simple fable about two children pursued down the Ohio River during the Depression by Harry Powell (Robert Mitchum), a villainous ex-con posing as a reverend. Powell knows that the kids know the whereabouts of the loot their late father Ben Harper (Peter Graves) stole during a desperate bank robbery and is keen to claim it for himself. John (Billy Chapin), the elder of the two, is horrified as Ben's old cellmate wheedles his way into the affections of their grieving mother Willa (Shelley Winters) and eventually marries her, all the while needling John and his little sister Pearl (Sally Jane Bruce) about the location of Ben's bounty (it's stashed inside Pearl's doll, Miss Jenny). When Powell eventually slays Willa, leaving her body parked at the bottom of the river behind the wheel of a sunken Model T Ford, her hair billowing in the current like “meadow grass under floodwater”, John and Pearl flee downriver by raft. The orphans are lucky to find salvation in the arms of saintly foster parent Rachel Cooper (Lillian Gish), but Powell won't give up that easily. Motherless children sure have a hard time. 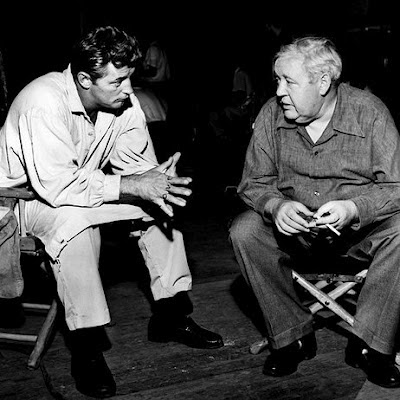 Big Bad Bob Mitchum is at his absolute best here as the falsest of false prophets, a fire-and-brimstone preacher turned serial widow murderer prone to twisting the Old Testament to his convenience. "There's plenty of killings in your book, Lord..." he observes, cocking an eye skyward. Mitchum’s later turn as Max Cady in Cape Fear (1962), another psychotic in pursuit, would serve as an encore but really it’s a pale imitation of the power he exerts here. Looming through doorways, casting a shadow over the horizon, loping by the riverside on a stolen white horse or hollering for the children unseen in the darkness, Powell is a demon from deep down in the blackest recesses of the pit.

Here's a nice example of his crooked charisma in action, a piece of evangelical showmanship that Spike Lee would have Radio Raheem imitate in Do The Right Thing in 1989.


I can think of few scenes more spine-tingling in cinema than the moment in which this Satanic serpent is sat coiled outside Rachel’s house crooning the ancient hymn ‘Leaning On The Everlasting Arms’ as the old Mother Goose keeps watch inside, eventually drowning him out with the voice of True Faith, a shotgun cradled on her lap. "It's a hard world for little things", she declares sadly.

Laughton’s film, based on a sprawling 293-page treatment of Davis Grubb’s voguish source novel by an unhappy and alcoholic James Agee, benefits enormously from its formal invention. It's exquisitely shot and lit by Stanley Cortez, who also worked with Orson Welles on The Magnificent Ambersons (1942), and owes a debt to both D.W. Griffith and F.W. Murnau. Night Of The Hunter's other major strengths are its thumping score from Walter Schumann, leaving us in little doubt that Mitchum is bad news by underlining his first appearance with a menacing orchestral theme that will prove as relentless as its subject. Young Chapin anchors the film as John, the young boy burdened by his father’s secret and the failure of the adults all around him to see the danger posed by Powell and provide the protection he and Pearl have every right to expect. Evelyn Varden is also memorable as the strangely named Icey Spoon, the children's grandmother and the strident voice of complacent double-standards. Former silent star Gish is wonderful too but it's Mitchum and Laughton's show and boy do they deliver.
Posted by Joe at 10:40