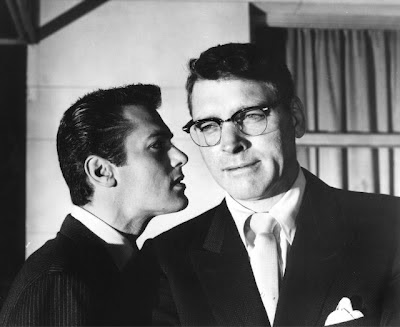 Just two years after completing The Ladykillers for Ealing, the great Alexander Mackendrick found himself in Hollywood directing this acidic noir as his old home studio was sold off to the BBC. Another masterpiece, Mackendrick’s film follows the slimy trail of Manhattan press agent Sidney Falco (Tony Curtis), a shameless and desperate story hustler on the payroll of celebrated Globe columnist J.J. Hunsecker (Burt Lancaster). The self-styled “eyes of Broadway”, Hunsecker is an influential opinion former whose syndicated editorial is read by 60 million people, allowing him to make or break careers with a simple clack of his typewriter. A monstrous control freak as well as a mastermind with the city in his grasp, Hunsecker bullies Falco into breaking up a relationship between his meek, naive younger sister Susan (Susan Harrison) and Steve Dallas (Martin Milner), a jazz guitarist with the Chico Hamilton Quartet whom Hunsecker disapproves of. But even a man as cheap and lowdown as Falco, unscrupulous enough to orchestrate smear campaigns, dupe prospective clients and whore out cigarette girls to rivals, balks at what’s expected of him on this particular job... 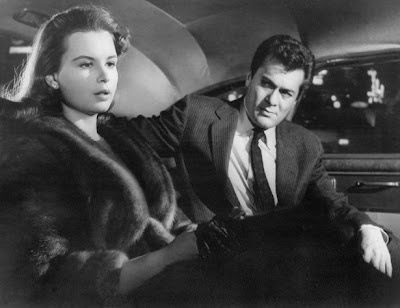 Sweet Smell Of Success is a coruscating tale of grubby ambition, cancerous cynicism and blackmail, a hellish vision of a world held to ransom by the satanic Hunsecker, who holds all the cards by ensuring he has the skinny on everyone. Waldo Lydecker in Laura (1944) and Addison DeWitt in All About Eve (1950) also understood the power of the press as a means of dispersing poison for personal political gain but living under Hunsecker’s all-seeing gaze is something far worse. Much more than just a gossip commentator, he is Orwell’s Big Brother personified, always watching and able to bring down a senator with a single sentence gravely informing his readership of their elected representative’s infidelity. The city’s great and good are helpless to fight back against the Hunsecker by-line and live in fear of his network of crooked informers. “I love this dirty town”, he says, without smiling. New York wouldn't look this rotten again until Travis Bickle got behind the wheel of his famous death cab to cruise its seven circles with hate in his heart.


The film’s story was based on a “novelette” by future Hitchcock screenwriter Ernest Lehman entitled ‘Tell Me About It Tomorrow!’, which was published in Cosmopolitan in 1950 and took inspiration from the life and career of Walter Winchell, coloured by Lehman’s own experiences of working as a PR man picking up scoops for Irving Hoffman, a columnist at The Hollywood Reporter. Hoffman originally broke off relations with Lehman in disgust at its publication before endorsing him as the best candidate to adapt the piece when news spread of its being optioned for a potential movie. Lehman got the job and originally hoped to direct the script himself before falling ill and bowing out of the project altogether. United Artists brought in Mackendrick instead, who quickly handed Lehman’s draft over to outcast left-wing playwright Clifford Odets to turn into something more cinematic and less dialogue-driven. Odets did so but took much longer than expected, occasionally composing fresh lines or rewriting complex new scenes on set up to an hour before shooting was due to commence. This nerve-wracking approach paid off in the end, however, and Lancaster, the film’s star and co-producer, delivers an utterly magnificent performance, his eyes flicking about frantically behind his reflective glasses as he sips tea deep in thought. His tiny teeth spit forth cruel character dissections as casually as breath from his lair in the 21 Club while his hulking swimmer’s frame promises a physical threat where there should be none. Curtis too is splendidly oily playing against type as Falco and there’s a memorably unsettling turn from a sweaty Emile Meyer as Lt. Harry Kello, Hunsecker’s unofficial muscle. Mackendrick’s cinematographer, James Wong Howe, also excels, cloaking the city in an atmosphere of moody hipster cool borrowed from French gangster films like Rififi (1955) and anticipating their New Wave successors À Bout De Souffle (1960) and Le Samouraï (1967). Rarely has a film said so much in so little time. Here’s mud in your column.
Posted by Joe at 21:57