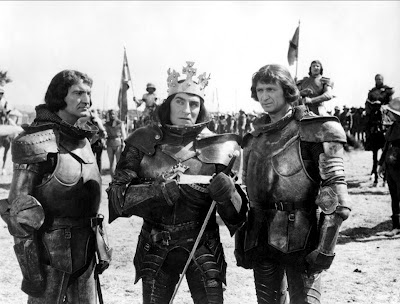 Another prestige literary adaption centred around a deformed anti-hero with a monomaniacal longing for power. Archaeologists claimed to have found Richard Plantagenet's bones buried beneath a car park in Leicester last month so what better time to revisit Laurence Olivier’s seminal staging of the Immortal Bard's Richard III for Alexander Korda’s London Films?

This was to prove the final entry in Olivier's Shakespeare cycle after Henry V (1944) and Hamlet (1948) and it remains a definitive portrayal of the Machiavellian crookbacked pretender (although Ian McKellen’s interpretation of Richard as a 1930s fascist in Richard Loncraine’s 1995 version is also highly memorable). Olivier had first played the role on stage at the Old Vic in 1944 and truly inhabits Richard, fleshing out the man as a twisted, gleefully conniving, resentful grotesque, self-loathing enough to sport the image of a wild boar on his heraldry but vicious in battle when it comes to self-preservation and the pursuit of glory. The great stage actor apparently based his limping portrayal of Edward IV’s usurper on Jed Harris, a theatrical producer he once described as “the most loathsome man I’d ever met”. Olivier’s characterisation went on to inspire John Lydon’s Johnny Rotten punk persona at the formation of the Sex Pistols in 1976 and, indeed, the diminutive Lord Farquaad in DreamWorks’ insanely popular fairy tale animation Shrek (2001). Larry entices the audience into the Duke of Gloucester’s murderous intrigues by addressing his soliloquies directly to camera – a replication of an established theatrical technique that proves a novel innovation on film, breaking the fourth wall in engrossing style.


Orson Welles, Grigori Kozintsev, Akira Kurosawa, Franco Zeffirelli and Kenneth Branagh are among those directors to have brought Shakespeare to the screen on multiple occasions but few could have summoned as expert a cast as Olivier does here, with knights of the realm John Gielgud, Cedric Hardwicke and Ralph Richardson joined by a wealth of talented newcomers including Claire Bloom and Michael Gough. All are impressive and understated and look at home in the period settings, which the director strived to make as historically accurate to the War of the Roses as possible. Filmed at Shepperton Studios in garish Technicolor, Olivier’s wandering camera does occasionally feel a tad studio-bound and a number of painted backdrops are painfully obvious. Location shooting might have been a better option,  budget permitting, as this helped bring a real sense of place to other period costume dramas like Fred Zinnemann’s later A Man For All Seasons (1966). Having said that, the one time the players do venture outside, for the climactic Battle of Bosworth Field, the results are slightly ludicrous as the parched landscape clearly gives itself away as southern Spain, some distance from rural Leicestershire. Nevertheless, Olivier is as rousing in battle as he is lurking behind the throne or crowing orders to Buckingham (Richardson) and his death amidst a sea of armour, bringing the House of York crashing down around him, comes as something of a relief, for us and for England.
Posted by Joe at 11:47