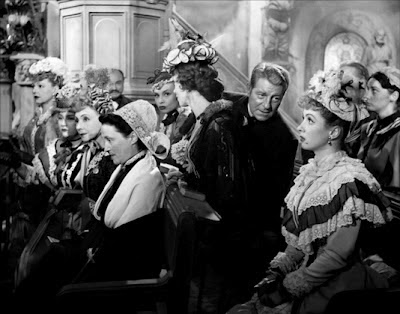 Jean Gabin and Danielle Darrieux in another portmanteau work, this time a trio of sublime Guy de Maupassant adaptations from Max Ophüls, the great poet of movement, symmetry and splendour. ‘Le Masque’ tells of a mysterious reveller who collapses from over exuberance one evening at Montmartre’s Palais de la Danse. Upon inspection by a physician, this strange dandy is revealed to be an elderly man sporting a rubber mask, endeavouring to defy the years by concealing his wrinkles and grey hair so that he can continue to pursue wine, women and song as he did in his youth. ‘Le Maison Tellier’ tells of a brothel madam (Madeleine Renaud) who closes her establishment for the weekend to attend her niece’s first communion in the countryside, attending the ceremony with her full complement of staff in tow, much to the delight of their host, her brother Joseph (Gabin). Finally, ‘Le Modèle’ is the tragic story of an artist (Daniel Gélin) and his model (Simone Simon) who fall in and out of love before her suicide attempt leads them to reconcile.

One is quick to run out of superlatives when it comes to Ophüls. The obvious thing to note is his virtuoso use of a camera, never more spectacular and inventive than in Le Plaisir, a film in which the director keeps finding ingenious new tricks with which to echo and enhance the themes and mood of his action. Ophüls sends us swirling deliriously around the Palais as the masked man throws himself into the can-can in insolent defiance of death, has us scale the walls of Madam Tellier’s cat house and peer through the windows before the shutters are discreetly closed and takes us hiking through the bushes to spy on two lovers as they quarrel by the river bank. But our man saves his most remarkable feat for last, the astonishing death plunge of Simon’s heartbroken model – racing up the stairs of Jean Servais’ studio before leaping and crashing through a glass conservatory roof below, all shot in the first-person. 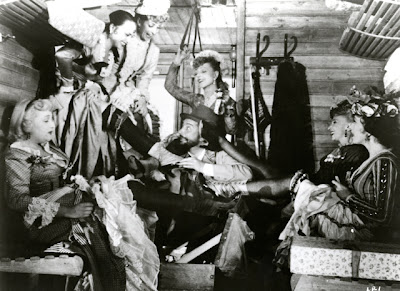 The film takes pleasure as its theme and I can think of few more joyous sights than that of Gabin’s cheery farmer ferrying his bevy of prostitutes by horse-drawn cart through the yellow rape fields of Normandy, a broad grin beaming across his face. His chaste romance with one of their number, Rosa (Darrieux), feels like a very human moment of connection between two lonely souls and her tears in the chapel and his drunken toast at the subsequent banquet are unforgettable because of the truths they encapsulate.
Posted by Joe at 12:11