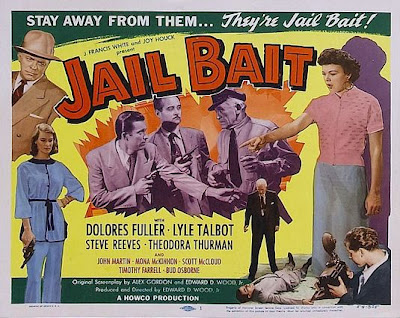 A little more Ed Wood for your delectation (the last, I promise). Wood’s second directorial effort, following the cockeyed muddle that was Glen Or Glenda (1953), was this really rather engrossing noir about aspiring stick-up man Don Gregor (Clancy Malone) who shoots a night-watchman during a bungled payroll heist at a vaudeville theatre and goes on the lam. The naive Don is then murdered himself by his nogoodnik partner Vic Brady (Timothy Farrell) when he considers turning himself in. Brady hides the body and blackmails the boy’s plastic surgeon father (Herbert Rawlinson) into altering his appearance in exchange for information about his son’s whereabouts. When Dr Gregor discovers Don’s corpse stashed in a closet at the Brady home, he exacts a horrific revenge on the killer. 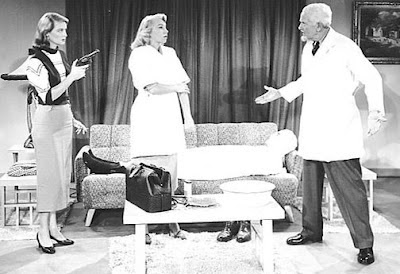 Jail Bait is naturally filled with hesitant, inexpressive acting - cop Steve Reeves and moll Theodora Thurman are particularly culpable - dreadful lines (“Messy things these shootings...”) and repeated use of the same living room sets. Wood regulars Dolores Fuller and Lyle Talbot do their best and there’s a surprising classical Spanish guitar score from Hoyt Curtin, who rarely varies its pace and thereby inadvertently robs certain key scenes of their drama, notably a car chase that must be the most pedestrian and dull police pursuit I’ve ever seen, a million miles away from the heady thrills of Bullitt (1968) or The French Connection (1971). The old fugitive-gets-plastic surgery plotline dates back at least to 1935’s Let ’Em Have It and was used more famously in David Goodis’s pacy pulp novel Dark Passage (1946) and its subsequent Delmer Davies adaptation as a vehicle for Bogart and Bacall in 1947. More recently, the idea was employed by Hong Kong action director John Woo to outrageous effect in Face/Off (1997). Ed Wood enthusiast Tim Burton would also pay homage to Brady’s unveiling here in a memorable sequence involving Jack Nicholson’s Joker in his 1989 Batman. Sadly, perhaps the most astonishing footage in Jail Bait is actually borrowed from elsewhere, a blackface routine featuring Cotton Watts and Chick from 1951’s Yes Sir, Mr Bones that has almost nothing to do with the plot.

Yes it’s appallingly racist and alarming that this sort of entertainment was ever considered acceptable anywhere at any point in human existence. But, it has to be said, this is a particularly fine example of this lamentable footnote to cultural history if you can get past the mortification and regard it objectively as a piece of straight clowning.

There are traces of real ability from Wood in Jail Bait – the quick cutting between the faces of assembled policemen and interested parties as they react to Brady’s bandages being removed really ratchets up the tension (at least, as far as Curtin's guitar allows). This may be a second rate B-movie with a half-arsed "don't take your guns to town" moral but it might just be Wood’s finest hour, proof that he could play ball and concentrate when he wanted to. I’d recommend it to all fans of the noir genre, even if only as a reminder of just how good the likes of Double Indemnity (1944) and Murder, My Sweet (1946) really are.
Posted by Joe at 12:32