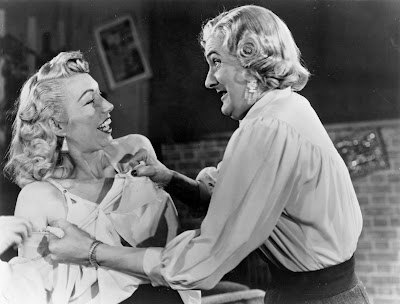 Wow. This baby was a passion project for schlock movie chancer Ed Wood, a semi-autobiographical, social issue pseudo-documentary that was wildly ahead of its time in sympathetically presenting transvestism to the masses and demanding its acceptance. A plea for social tolerance and understanding, the film carefully frames its subject as a serious psychological condition but is really a soapbox for the director’s views. Wood painstakingly anatomises his troubled everyman protagonist and his schizophrenic double-life and argues that men compelled to wear women’s clothing should be free to do so without fear of ridicule. A noble cause then, which makes it even more of a shame that the end result is such rubbish.


As we know from Tim Burton’s 1994 biopic, Wood himself loved to borrow his girlfriend Dolores Fuller’s underwear and angora sweaters and claimed to only truly feel at ease when dressed as a woman. He plays the title character(s) here himself under the pseudonym “Daniel Davis” and Fuller herself appears as Barbara, Glen’s loving fiancée. Both are fine, Fuller in fact is quite lovely, and the overall quality of the acting isn’t as, er, “wooden” as might have been expected – Lyle Talbot and Timothy Farrell can't be blamed for failing to overcome the writer-director’s preachy, stagy dialogue in their bookending scenes – but what on earth is Bela Lugosi up to? The washed-up horror icon was an impoverished morphine addict by this point and clearly glad of the work – game and amused as the film’s godlike narrator, The Scientist. Reclining in a laboratory lair filled with plastic skeletons, foaming beakers and African tribal masks, Lugosi waxes philosophical in a vague, portentous sort of way about cosmic matters and green dragons that has little or nothing to do with poor Glen’s identity crisis. “Pull the string! Pull the string!” Bela bellows as stock footage of stampeding buffalo charges across the screen. Lunacy. The old ghoul summons up all of his experience to bring conviction to the part but it’s nakedly apparent that Wood owed him a favour and hoped that having Lugosi’s name above the title might still mean something to someone somewhere.

Other problems with Wood’s haphazard, impatient, collage-assembly approach to filmmaking become obvious in Glen Or Glenda’s meandering middle section, in which Glen is tormented by Freudian nightmares of Satan, social disapproval and bizarro bondage scenarios. These episodes, presumably intended by Wood to be variously arty, symbolic and titillating, are as weird as anything in David Lynch’s Eraserhead (1977) and confusing at best. Some of Farrell’s lines as the psychiatrist sound suspiciously like they’ve been lifted wholesale from a psychology textbook to give the film some much-needed academic credibility while poor old Ed squanders his good work in pointing out the elusive nature of sexuality by having a stentorian voiceover insist in ludicrous, po-faced fashion that almost all men wear pink panties beneath their overalls and suits. His gripe about how uncomfortable and itchy men’s leisurewear is compared to women’s is also highly unconvincing and unintentionally hilarious while the concluding passage, about a G.I. named Alan who undergoes a sex change operation, feels tacked on. And so it was, to placate Z-list producer George Weiss, who had been expecting a topical picture about transsexuals to capitalise on the furore that had surrounded the previous year’s Christine Jorgensen affair.

For all that, perhaps we shouldn't be laughing at a tortured soul pouring his heart out and imploring our pity, even if the result is as strange an egg as this. Glen Or Glenda does once again contain some crisp black-and-white cinematography from long-suffering Wood regular William C. Thompson and deserves praise for its intentions in dealing with a subject almost always played for laughs by Hollywood (of which there’s no finer example than Billy Wilder’s Some Like It Hot, 1959). Transgender issues wouldn’t be examined this earnestly again until Hilary Swank braved white trash abuse as Brandon Teena in Boys Don’t Cry (1999).

P.S. This wasn’t the end for Glen Or Glenda. The film naturally lives on as an oddball, exploitation curiosity while Wood himself would resurrect his protagonists for a brace of sleazy pulp novels a decade after the film wrapped, The Killer In Drag (1963) and Death Of A Transvestite (1967), neither of which won the Pulitzer.
Posted by Joe at 18:28