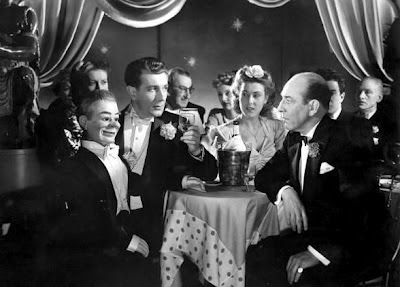 This was Ealing’s only horror film and, although it proved influential, it has to be said that Dead Of Night is a bit of a mixed bag. A portmanteau affair bringing together five tales of the uncanny and supernatural, the film united four of Michael Balcon’s finest directors - Alberto Cavalcanti, Charles Crichton, Basil Dearden and Robert Hamer – but ultimately suffers as a result of its inconsistency of tone.

Architect Walter Craig (Mervyn Johns) arrives at a rural country manor where he is unnerved to find that he has encountered several of the strangers he meets there before in a dream. His alarm is dismissed by the resident rationalist psychiatrist (Frederick Valk) but the rest of the guests are intrigued and begin recounting their own experiences. The highlight of these stars Googie Withers as a bride-to-be who presents her fiancé Peter (Ralph Michael) with an antique mirror as a wedding gift, little realising that the looking glass is haunted and reflects only the bedroom of its previous owner, a nineteenth century aristocrat who murdered his wife and seems intent on possessing Peter from beyond the grave. Directed by Hamer, then an editor making his debut behind the camera, this is genuinely scary stuff that benefits enormously from Withers’ experience and conviction. The nuttiest tale in the bunch comes from Crichton and reunites professional Englishmen Basil Radford and Naunton Wayne, better known as Charters and Caldicott from Hitchcock’s The Lady Vanishes (1938). This time the boys play Parratt and Potter, two best friends and rival golfers (rather than cricket buffs) who fall out over a girl and decide to play 18 holes for her hand. Parratt wins her by cheating, prompting Potter to drown himself in a lake, only to return from the hereafter to haunt his old chum on his wedding night. A great deal of silliness but apparently taken from an original story by H.G. Wells, if you can believe it. Dearden directs much of the workmanlike filler material while Cavalcanti brings in the most opulent scenes, a traditional Victorian Christmas ghost story of the don’t-be-ridiculous-he-died-years-ago variety and the concluding account of a ventriloquist driven to drink and insanity by a dummy with a life of its own. The killer doll plotline may be an old chestnut now thanks to Child’s Play (1988) and its ilk and was hardly fresh in 1945, but the episode is notable for a riveting central performance from Michael Redgrave, foreshadowing Norman Bates as a tormented and increasingly psychotic schizophrenic. 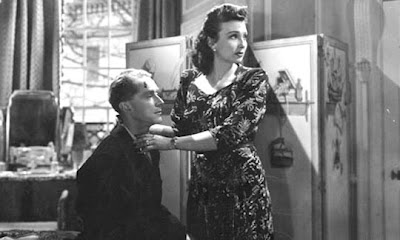 As well as the directors and stars on show, Balcon was able to deploy studio writers T.E.B. Clarke, John Baines and Angus MacPhail with composer Georges Auric to crank up the tension. There’s also a wealth of British character talent on show in supporting roles, from Miles Malleson as a gleeful hearse driver in an E.F. Benson-based short to Peter Jones as a clubhouse barman. Uneven overall but a suitably dark film to have made in wartime, there’s enough good stuff in Dead Of Night – not least the creepy ending that ties it all together - to make it a shame the studio didn’t return to the genre at a point when it was casting around for a new creative direction.
Posted by Joe at 22:14