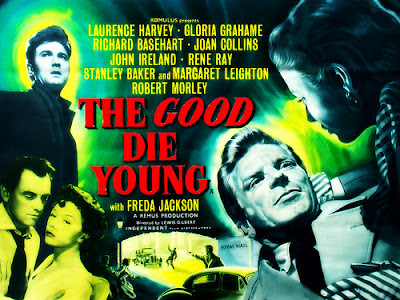 I was attracted to this British noir by the promise of Gloria Grahame and a young Joan Collins among the cast, two very different representatives of female sexuality colliding. Perhaps inevitably, both end up playing second fiddle to the menfolk in this grim but earnest character study set against a backdrop of post-war hardship.

American office clerk Joe Halsey (Richard Basehart) flies into London in search of his English war bride Mary (Collins), who has returned to care for her psychologically manipulative mother (Freda Jackson). The latter deeply resents Joe taking her daughter away from her and Halsey is forced to seek refuge from her accusations and neurotic self-pity in the local pub. There he befriends ex-boxer Mike Morgan (Stanley Baker), who’s just lost his left hand in an accident, off-duty US airman Eddie Blane (John Ireland), unhappily married to cheating Hollywood film star Denise (Grahame), and playboy ‘Rave’ Ravenscroft (Laurence Harvey), a decadent charmer and gigolo who preys on his heiress wife (Margaret Leighton) for money to pay off his gambling debts. The new pals console each other over pints of bitter before Rave proposes that they rob a postal truck and split the loot. The resulting caper naturally goes awry. 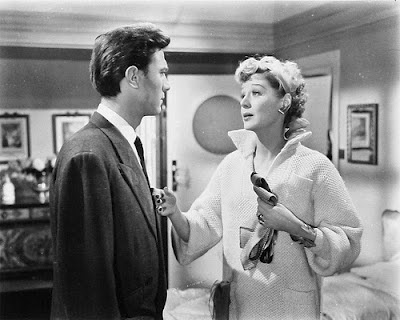 Picking up the familiar Ealing theme of desperation driving fundamentally decent people to crime, The Good Die Young ended up reminding me of something much more modern and unexpected. While Michael Balcon’s studio made pictures like The Lavender Hill Mob (1951) and The Ladykillers (1955) in which the conspirators prove their own undoing in the aftermath of an otherwise successful job, the prologue to Christopher Nolan’s The Dark Knight (2008) is the only other instance in cinema I can think of in which a psychotic gang member begins picking off his accomplices mid-heist in order to increase his share of the bounty. But that’s exactly what happens here as Harvey’s odious cad Rave is gradually revealed to be a grinning murderer, shooting a policeman and then Mike in the back before dashing Eddie to the train tracks in ruthless fashion. He’s the only character whose troubles are his own fault and not attributable to grasping in-laws, making this phoney war hero a figure of real evil, an upper crust Pinkie Brown. No wonder his aristocratic father (Robert Morley) is so terrified of him. Harvey would of course go on to play another sinister, highly suspect veteran in John Frankenheimer's paranoid and really rather boring Red Scare thriller The Manchurian Candidate (1962). Here, Rave’s betrayal of his fellow would-be hoods marks a genuinely shocking about-turn for a work that up until then has been disappointingly pedestrian, a cheap and shabby British imitation of American crime cinema without the quirk or élan of Jules Dassin’s Night & The City (1950). Grahame’s presence indicates as much but she’s hopelessly underused, memorable largely for a scene in which she is unceremoniously dumped into a cold bath by her frustrated husband. 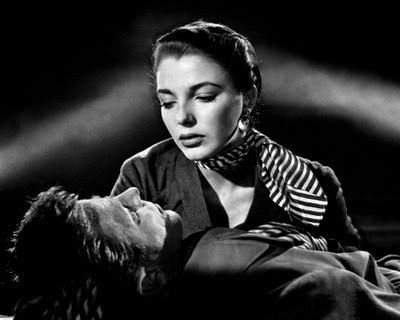 Directed with occasional invention by Jack Clayton (who would go on to shoot The Innocents, 1961), notably in conjuring the sleazy atmosphere of the boxing arena with scenes that feature punches thrown directly to camera, the film was produced by the prolific Lewis Gilbert for Romulus Films from a novel by Richard Macauley. The score was provided by Frenchman Georges Auric.
Posted by Joe at 14:02