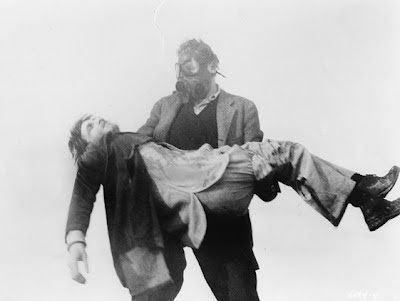 Richard Matheson's well-worn post-apocalyptic science fiction novel I Am Legend (1954) will be familiar to modern cinemagoers from the 2007 blockbuster starring Will Smith and to an earlier generation who remember it as The Omega Man (1971) with Charlton Heston. However, the first filmed version was this shoestring Italian B production with Vincent Price as the titular loner. Matheson had scripted the first two of Roger Corman's Edgar Allan Poe features, The Fall Of The House Of Usher (1960) and The Pit & The Pendulum (1961) and would go on to write two more, Tales Of Terror (1963) and The Raven (1964), all of which were built around Price's hammy persona. One of Tales Of Terror's producers was Samuel Z. Arkoff, the head of American International Pictures (AIP), who was impressed enough by Matheson to acquire the rights to I Am Legend  in 1961 from fellow producer Robert L. Lippert, who in turn had picked it up for a song from legendary British horror studio Hammer. The ever accommodating Price again signed on to take the lead, the actor then working on a brace of low budget costumes dramas in Italy, Nefertiti, Queen Of The Nile and Rage Of The Buccaneers. AIP's resulting cheapo was shot in Rome to suit its star's schedule with an Italian director, Ubaldo Ragona, appointed to co-helm the project with American Sidney Salkow, whose role was to relay instructions to Price. Matheson himself helped shape the screenplay under the pseudonym "Logan Swanson" but apparently never cared for the finished item. A shame as the result is a memorably morose meditation on loneliness, the resilience of the human spirit and mob mentality that would serve as a key inspiration behind George A. Romero's groundbreaking zombie horror Night Of The Living Dead (1968) and looks forward to Cormac McCarthy's novel The Road (2006). 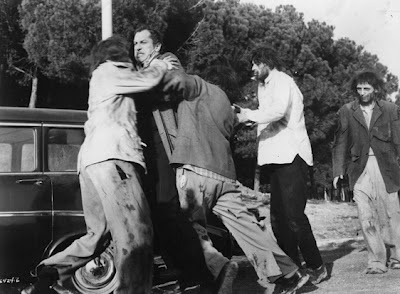 Scientist Robert Morgan (Price) believes himself to be the last human being alive after the rest of the planet's population has been wiped out or turned into vampires by a mysterious airborne plague. As Morgan has no one left to talk to, his depressed interior monologue provides the film's sole source of spoken narration. Morgan can't understand why he alone has been spared the awful fate of his peers and tortures himself each night by endlessly re-watching the same old footage of his late wife and daughter as the undead cadavers of former friends and colleagues gather outside to smash in his windows, bating and taunting him cruelly. The Last Man on Earth lives modestly in the same house he once occupied with his happy family, only now the windows are boarded up and the place has fallen into disrepair. He spends his time chalking off the days on a calendar scrawled on the wall, replenishing the garlic flowers tied to his front door, sending out distress signals via a shortwave radio, carving fresh stakes and sweeping the corpses off his driveway for incineration. Despite the infinite material possibilities that looting might offer, Morgan strives to obey the laws of a world that no longer exists and takes nothing more than he needs from its abandoned stores (which, for some reason, remain conveniently stocked with supplies of fresh garlic but we'll let that pass).


Hope is all that Morgan has to live for but his redoubtable nature and self-sufficiency makes the character compelling. Price looks more wearied than usual (although he's still commendably clean-shaven) and instils Morgan with real poignancy, notably in the scene were his laughter descends into violent sobs at the memories evoked by a home movie or through the pathetic elation he displays at discovering a small black poodle alive and wandering the streets unharmed. When he eventually runs into Ruth (Franca Bettoai), apparently the Last Woman on Earth, his dreams of salvation are almost realised before being savagely pulled apart by mistrust and paranoia on both sides. The flawed, cultish "new society" of survivors she belongs to anticipates 28 Days Later (2002) and the emergence of its members prompts the film to lay down its final card as Morgan is chased and unceremoniously slain on a church altar. Once the monster was pursued by the masses seeking revenge: now the mob has become the monster. A bleak note to end a relentlessly grim and humourless work on, but, hey, this is the end of the world we're talking about here.
Posted by Joe at 11:51