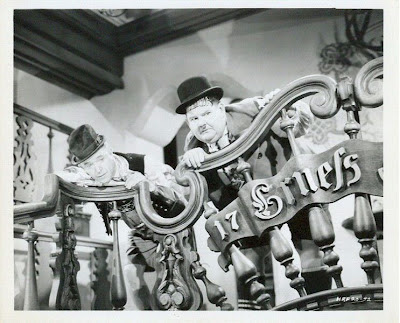 Imagine you've just started a business selling mousetraps door-to-door. Where in the world is the likeliest location for hawking your wares? Why, Switzerland of course! Think about it. With all that holey cheese knocking around, the Swiss must be inundated with hungry mice eating them out of house and home and prepared to pay plenty for a readymade solution. Simple. It’s with this cock-eyed logic in hand that Stan and Ollie don their fur coats and head for the mountains in Swiss Miss, directed by John G. Blystone. A fortune must surely await. 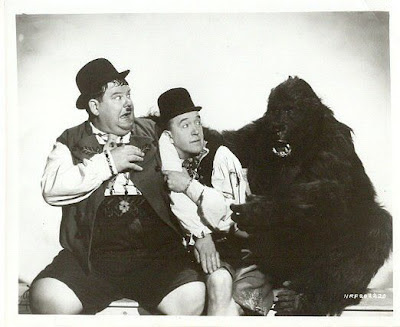 The real reason for Laurel and Hardy to choose Switzerland for this charming caper is that it’s a perfect location for easy comedy, offering scenic backdrops, silly costumes and an avalanche of highly strung foreigners. The plot involves the pair being handed an obsolete banknote, meaning that they can’t pay their hotel bill after a lavish meal and are thus forced to serve as kitchen staff to work off their debt. Also staying at the resort is Viennese operetta composer Victor Albert (Walter Woolf King) and his estranged wife Ann (Della Lind), whose success as a singer he is bitterly jealous of. Like the later Marx Brothers outings, in which King occasionally appeared as a villain, Laurel and Hardy play benevolent agents of cupid here, their pratfalls and mishaps making up the bulk of the film before the resolution of the lovers' quarrel takes centre stage to provide a happy ending. The result is a delightfully unreal musical fantasy of Alpine life that anticipates The Sound Of Music (1965). But don’t let that put you off.

As always with Stan and Ollie, the boys make even the most well-designed gag look effortless, as in the scene in which they scrub the steps of a flight of stairs with soapy water, sending the foam sailing over the banister and into the pipes of an organ below, causing it to blow bubbles whenever anyone attempts to play it. The moment when they are asked to ferry a piano across a rickety rope bridge while being goaded by a fugitive performing gorilla is an all-time classic, even if it does echo two earlier shorts they had made for Hal Roach in 1932: The Music Box and The Chimp.


Other highlights include the extraordinary sight of Ollie wiping chalk tallies off a blackboard with his formidable posterior and Fred Astaire foil Eric Blore singing ‘I Can’t Get Over The Alps’ in lederhosen and a Tyrolean hat. The scene above is also a doozy: Stan attempting to con a serious-minded St Bernard rescue dog out of its brandy by feigning injury in a fake snow storm made of feathers.
Posted by Joe at 22:33