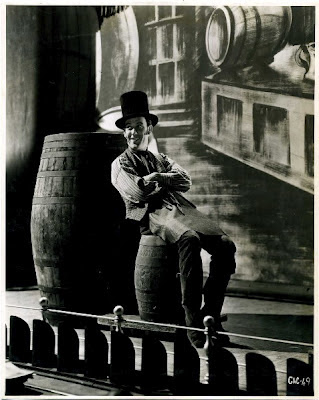 The closest Michael Balcon’s Ealing ever came to making a musical, this splendid period piece stars comedian Tommy Trinder (“You lucky people!”) and the great Stanley Holloway as rival lion comiques in the gas-lit music halls of mid-nineteenth century London. Trinder is Joe Saunders, a miner who comes to the capital to seek his fortune, finding work singing in a pub in Elephant and Castle where he impresses before being scouted and invited to play at The Mogador, a raucous watering hole. Saunders is roundly booed on his debut after trying to impress with a sentimental ballad preaching temperance but the venue’s brassy owner, Bessie Bellwood (Betty Warren), decides to give him another chance on the condition that he change his name and sing drinking songs more in keeping with the boozy atmosphere of the place. Adopting the stage moniker George Leybourne after his home town, the young man proves a roaring success. However, his burgeoning reputation catches the ear of The Great Vance (Holloway), London’s leading comic singer, who accuses Leybourne of stealing his act and orders him to cease and desist. Their rivalry grows as the pair compete with one another to sing the latest drinking song – ‘Ale, Old Ale’, ‘Gin, Gin, Gin’, ‘The Brandy & Selzer Boys’, ‘A Glass Of Sherry Wine’ - until the entire liquor cabinet has been exhausted and they resolve to settle their differences on the duelling field. Thereafter Leybourne and Vance reluctantly agree to end their arms race and join forces when the government forms a select committee to investigate the music halls as dens of depravity under pressure from the West End, whose theatres regard the popularity of working class variety shows as a threat. But don’t worry - this is the sort of cosy old chestnut where a last minute reprieve is granted following an unexpected change of heart from an influential official. 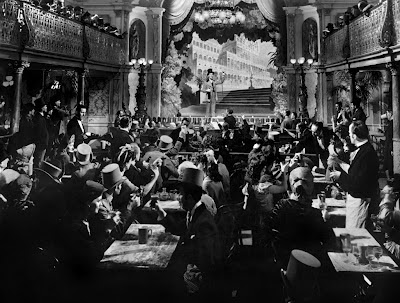 Trinder’s character is based on a real music hall performer of the 1860s of the same name, whose signature song gives Alberto Cavalcanti’s film its title. Leybourne is best remembered today for writing ‘The Daring Young Man On The Flying Trapeze’, a popular song about French acrobat Jules Léotard. Cavalcanti, a Brazilian set designer and documentarist who had worked in Paris before being invited to England in 1934, was appointed to direct Champagne Charlie by Ealing head Balcon on the understanding that he would bring his eye for social realism to the subject. Rather than the Dickensian squalor Balcon was expecting, Cavalcanti produced an escapist entertainment that chimed nicely with the public appetite for nostalgia in war time, a tribute to the popular stage that was well on its way to dying out. Pub sing-alongs had gained a new importance in the forties, serving as a means of lifting morale and expressing camaraderie against a common enemy over a few pints during the war. This is a point well illustrated in Terence Davies’ most recent film, The Deep Blue Sea (2011), in which a crowd of evacuees gather on the platform at Aldwych tube station during the Blitz to sing ‘Molly Malone’ defiantly as the bombs rain down above ground. Balcon would eventually get Cavalcanti to play ball, meanwhile, assigning him to direct an adaptation of Nicholas Nickleby in 1947. 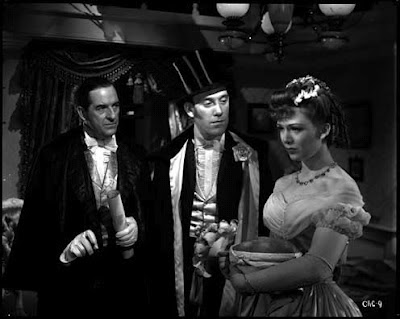 Perhaps closer to Christopher Nolan's  The Prestige (2006) than Charlie Chaplin's Limelight (1952), the finest scene here is the spectacular mass brawl that erupts when a gang of paid agitators claim to be outraged by an openly socialist song performed by Leybourne, prompting the costumed turns and sozzled patrons to start swinging their firsts and tossing meat pies. Cavalcanti's camera roams the stalls, covering the action from any number of inventive angles and giving us a real feel for what it must have been like to find oneself inside a beery hovel like The Mogodar. Trinder, Holloway and Warren make for an engaging trio and there’s handsome support from Jean Kent as a ballerina whose love for a lord looks set to be stifled by social snobbery. Look out too for Billy Shine and Harry Fowler, the young rogue from Hue & Cry (1947), as stage hands, Vida Hope as a barmaid, Guy Middleton as a “tipsy swell” and Eddie Philips playing to type as an East End boxer. Based on a play, the screenplay was written by John Dighton, Angus MacPhail and Austin Melford with Douglas Slocombe on camera duties. T.E.B. Clarke and the flamboyantly homosexual peer and aesthete Lord Berners, the sort of fellow to delight in dying pigeons pink, were among those contributing new song lyrics.
Posted by Joe at 13:58