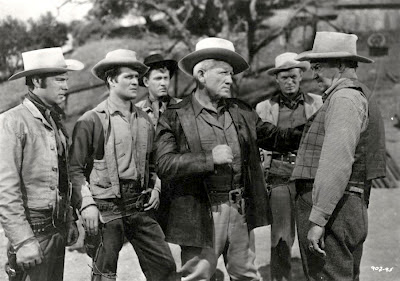 Somehow I’ve managed to hit 26 without ever seeing a Spencer Tracy film. Despite being an avid viewer of classic Hollywood movies for as long as I can remember, I’ve just never come across the man in anything. To my eternal shame, I haven’t seen Bad Day At Black Rock (1955) or any of the comedies he made with Katharine Hepburn, not even Guess Who’s Coming To Dinner (1967). Although I’m familiar with his body of work and uniquely craggy features, Tracy has been a cultural blind spot with me for years that I’ve always meant to put right and never found the time for. Until today. And now I feel like a fool for denying myself the pleasure for so long.

Edward Dmytryk’s oedipal succession Western Broken Lance is a relocation of Jerome Weidman’s 1941 novel I’ll Never Go There Any More by screenwriter Philip Yordan, which was previously filmed as House Of Strangers (1949) with Edward G. Robinson, also with a script by Yordan and also produced by Sol C. Siegel. It may not be a typical Tracy outing but it seemed to me to be as fine an introduction as any to this formidable old bear. The actor commands the screen as temperamental Irish patriarch Matt Devereaux, a vivacious, bull-headed cattle rancher at odds with his grown sons, led by the eldest Ben (Richard Widmark), a deeply embittered and jealous sort who has a progressive vision for the land his father has strived to win for the family through gunpoint diplomacy and unauthorised lynchings. Ben wants to sell the grazing country to Eastern oil barons but Devereaux Senior is having none of it and thrashes his offspring for the suggestion. Only Matt’s youngest and favourite son Joe (Robert Wagner), the “half-breed” product of his controversial second marriage to Comanche princess Señora (Katy Jurado), remains loyal to the old man’s wishes, eventually doing time on Matt’s behalf after the latter leads a raid on a copper refinery owned by a mining company whose operations are polluting the stream were the Devereaux herd drink. When Joe emerges from prison after three years of breaking rocks, his father is dead, his mother has returned to her people and his brothers are pressing ahead with the sale as planned, offering him $10,000 to get out of town. When Joe tosses the cash contemptuously into the nearest spittoon, Ben’s ire is stoked and the siblings lock horns one final time. 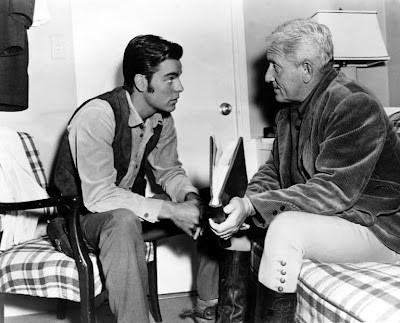 Tracy’s Matt Devereaux makes for a wayward father, too busy building an empire with tenacity and ruthlessness to lavish attentions on his sons and paying the price for his neglect in old age. He refuses to move with the times, resisting the spread of civilised Eastern values into a territory he helped build as a young fugitive from the Potato Famine armed with a six shooter and bull whip. Like King Lear, Devereaux must live to see the kingdom carved up between his undeserving progeny, two of whom are dullards and the other a monster (the appropriation of this same grand theme also provides a subplot for Anthony Mann’s 1955 Western, The Man From Laramie). The best among them and the true heir to his legacy is Joe, who represents hope for the future and rises above the racism he encounters from the community to win the heart of the governor’s daughter, Boston-educated society beauty Barbara (Jean Peters). Wagner’s Joe anticipates Martin Pawley in The Searchers (1956) and makes for an amusingly fifties hero – a handsome, troubled youth with elaborately combed and pomaded hair who only gets the girl when he articulates his feelings, not by impressing with brute heroics. However, his unspoken bond with his mother, played by the wonderfully sad-eyed genre regular Jurado, is extremely touching, as indeed is her love for Tracy’s Devereaux, deep and enduring after 25 years of ignored social disapproval.

Broken Lance is also beautifully shot in colour by Dmytryk, who captures the sun bursting through banks of cloud, riders’ reflections in murky creeks and dead trees writhing out of red earth superbly.
Posted by Joe at 23:20