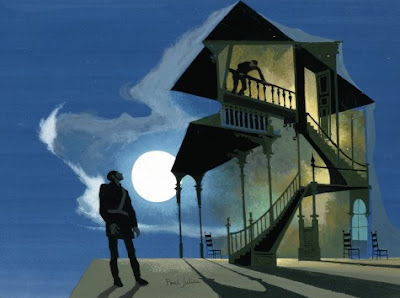 Here's a great little find. TCM and Sony recently released, UPA: The Jolly Frolics Collection, an amazing DVD box set compiling 38 theatrical cartoons drawn between 1948 and 1959 by United Productions of America (UPA) and released through Columbia Pictures. The studio briefly attempted to challenge the supremacy of Warner Brothers and Disney with a series of inventive shorts featuring such characters as Mr Magoo and Gerald McBoing Boing before cracking under pressure when many of its writers were subjected to scrutiny by the House Un-America Activities Committee. Several of UPA's cartoons were Oscar nominated, however, including this exquisite and really rather frightening Edgar Allan Poe adaptation by director Ted Parmelee and designer Paul Julian. This was the first cartoon ever to receive an X-rating from the British Board of Film Censors, which was perhaps something of an extreme reaction but it's certainly a powerful piece.

Narrated by the inimitable James Mason with music by Boris Kremenliev, this nightmarish surrealist animation captures the essence of Poe's intense short story of 1843 in a way that any live-action version would be hard pressed to match. Mason went on to record a number of dramatic recitals of Poe's work for Decca in 1958, accompanied by Buddy Cole's sinister organ and a reading of the Barbara Stanwyck thriller Sorry, Wrong Number by Agnes Moorehead, which you can download here. The actor's lugubrious tones are ideally suited to the hysterical source material.
Posted by Joe at 11:32