The Gospel According To Matthew (1964) 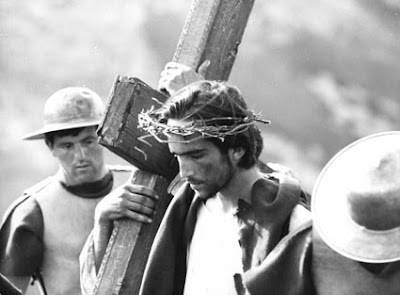 I saw this last night as part of the brilliant New Cross & Deptford Free Film Festival in south east London, which is running for the rest of this week and is well worth investigating if you're in the area. The event is entirely organised by unpaid volunteers and strives to present films in unusual contexts for the benefit of the local community. Following a lie-down screening of Michel Gondry's The Science Of Sleep (2006) on Tuesday night at Lewisham Arthouse, in which the film was projected onto the ceiling by my very own brother Rob, Wednesday's offering was this tremendously beautiful account of the life of Christ, from the nativity to the crucifixion, courtesy of celebrated Italian auteur Pier Paolo Pasolini, shown in Deptford's St. Nicholas Church. Hard pews aside, the setting certainly enhanced the experience and helped create an appropriately reverent atmosphere for one of cinema's most important works. 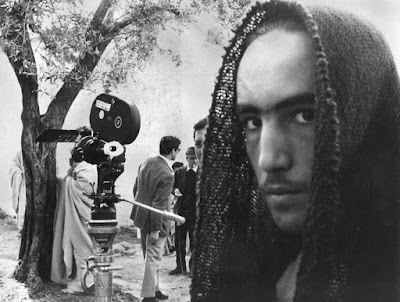 Pasolini himself was a (conflicted) atheist, a homosexual and a Marxist and many attempts have been made to read his personal affiliations into the depiction of Jesus of Nazareth here. Pasolini's Christ is certainly a humourless, temperamental, hectoring sort, pouring forth a steady stream of sermons and parables to his disciples as they wander the windswept hills in contemplation, but whether he is really intended to be seen as a revolutionary leader rather than a benign teacher is hard to say. The film is, however, very much an ode to humanity, with Pasolini's camera lingering long on close-ups of his largely non-professional cast, pausing to find the beauty in their imperfections. The production as a whole feels like a film for the people and is pleasingly unfussy in its execution. The child actors look shy and occasionally turn away self-consciously while the elders grin for slightly too long through snaggled teeth, their very amateurishness adding huge charm and authenticity to proceedings and breathing new life into the familiar stories of the New Testament. Christ himself is played by Spanish economics student Enrique Irazoqui (who apparently got the part ahead of Beat icon Jack Kerouac), while the director seamlessly melds Bach's 'St. Matthew Passion' with Odetta's spiritual blues on the soundtrack and favours rural southern Italian locations over the Middle Eastern sites he initially scouted (the subject of his 1963 documentary Seeking Locations In Palestine For The Film Gospel According To Matthew), creating a landscape more immediately familiar to his audience and in harmony with his performers. Costumes are minimal and special effects non-existent - the feeding of the 5,000 is dealt with in one quick cut -  the director clearly unconcerned with miraculous spectacle, historical accuracy or pedantic recreations of Roman-occupied Jerusalem and Galilee. The emphasis here is on simple naturalism, placing the film firmly in the contemporary neo-realism movement and a million miles away from the earnest, beardy Biblical epics Hollywood was churning out at the time, of which Cecil B. DeMille's The Ten Commandments (1956) and Nicholas Ray's King Of Kings (1961) are typical examples. Straightforward and real, Pasolini's Gospel According To Matthew is a towering achievement.

Odetta - Sometimes I Feel Like A Motherless Child
Posted by Joe at 11:26