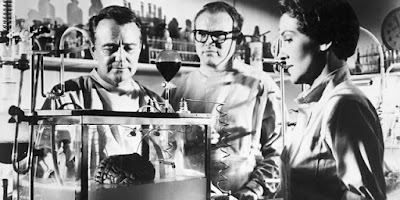 I've just got back from watching this superior science fiction B picture at the Wellcome Collection in Euston, one half of a double bill showing as part of the centre's current exhibition, 'Brains: The Mind As Matter'. Yesterday's 'Brains On Film' strand consisted of this creepy horror starring Lew Ayres and Nancy Davis, the future Mrs Ronald Reagan, and Gray Matter (2004), an astonishing documentary by Joe Berlinger about the rediscovery of a laboratory filled with the brains of murdered mentally handicapped children in the basement of a Viennese mental institution, once the subject of horrific Nazi eugenics experiments. Berlinger observes the brains being given a solemn state funeral and then pursues the man responsible, Dr Heinrich Gross, a one-time recipient of the Cross of Honour still living comfortably on a generous pension courtesy of the Austrian government. A jaw-dropping story that's well worth seeking out.


Donovan's Brain, directed by Felix Feist from Curt Siodmak's 1942 novel, concerns US neuroscientist Dr Patrick Cory (Ayres), who is called in to aid the victims of an air crash. The only passenger to survive the accident is cruel, tax-dodging tycoon W.H. Donovan, but he too dies on the operating table. On the spur of the moment, Cory makes the ethically dubious decision to amputate the deceased's brain because he believes he can keep it alive in a tank, a call met with disapproval by his colleague Dr Frank Schratt (Gene Evans) and loving wife Janice (Davis). Sure enough, the brain flourishes, but Cory's behaviour becomes increasingly erratic and it soon transpires that his conscious mind is being controlled telepathically by Donovan's disembodied organ, which has retained its former owner's crooked personality. Bad business ensues.

Ayres was always a quality turn and is splendid in the lead here playing a latter day Dr Jekyll, adopting the limping stoop, cheap cigars and blue serge pinstripe suits of his deceased possessor without knowing why. His transformation from earnest country doctor into villainous capitalist with a plan to conquer the world's financial markets like some zombified Warren Buffett could have been played for satirical laughs but is instead affecting and sad. There's credible support from Evans and the future First Lady and look out too for noir character actor Steve Brodie as blackmailer Herb Yocum, the hack who knows too much. Another noir connection here comes from Siodmak, whose brother Robert directed a number of films in the genre, most notably The Killers (1946) with Burt Lancaster and Ava Gardner. Curt Siodmak fled his native Germany in the late thirties and its possible to read Donovan's Brain as an allegory for the rise of Nazism, if one sees the Third Reich as a puppet master bending the German populace to its will with aggressive rhetoric and propaganda. This was the second filmed version of the novel - the first being The Lady & The Monster (1944), a Gothic horror riff featuring Erich von Stroheim - and adapts the source to echo post-war anxieties about communist brainwashing, a common theme implicit in other movies from the ectobrain sub-genre like The Brain From Planet Arous (1957) as well as in more mainstream Cold War dramas like John Frankenheimer's The Manchurian Candidate (1962). Siodmak spent much of his prolific career as a screenwriter in Hollywood, his best known work being The Wolf Man (1941) with Lon Chaney Jr and Claude Rains, another story about a man losing his identity to a monstrous inner force. Feist's film of Donovan's Brain itself contains a nod to classic horror of this stripe at the denouement, when a bolt of lightning strikes a conducting rod on the roof of Cory's home laboratory, causing the evil brain to be stewed in its own juices. Whether this is divine intervention or mother nature moving to end the throbbing cerebrum's reign of terror is left unclear, but it's a detail that certainly harks back to the galvanic experiment being conducted by Colin Clive's Victor Frankenstein in James Whale's famous 1931 Universal adaptation of the old Mary Shelley yarn. Donovan's Brain and its ilk can also be seen as relatives of the haunted limb horror films that thrived in the thirties, typified by Karl Freund's Mad Love (1935).
Posted by Joe at 08:22