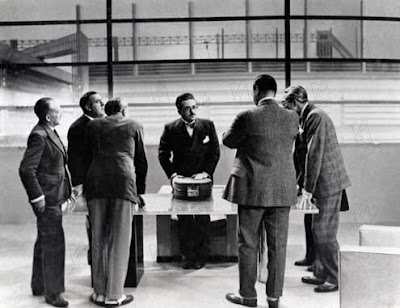 "Everyone sits in the prison of his own ideas."
- Albert Einstein

René Clair directed this amazingly influential and charming satire about two convicts, sick of piecing together toy rocking horses on a production line, who escape prison and begin new lives. Louis (Henri Marchand) reinvents himself as a market trader selling phonographs and works his way up to become a rich industrialist while Émile (Raymond Cordy) takes a job in his friend’s ultra-modern factory and falls for the lovely Jeanne (Rolla France). Their lives are complicated by haughty socialites, overbearing uncles, fascist foremen and blackmailing gangsters before the pair conclude that the world of work is really not so different from life behind bars, hand over the factory to the workers and hit the road in search of real freedom.

Perhaps the stand-out scene here is the finale, in which Louis makes a speech inaugurating his newly mechanised plant in a strong wind while a suitcase full of money is blown open and sends franc notes billowing around the yard, an event that causes the assembled dignitaries to race around in their toppers greedily grasping for bills rather than listening to the remainder of the ceremony. It’s easy to see the roots of Laurel and Hardy in the bumbling of the physically similar Marchand and Cordy in À Nous La Liberté, which also prefigures the madcap Marx Brothers thumbing their noses at privilege and the bemusement with new technology that Jacques Tati would make his theme in Mon Oncle (1958). That’s to say nothing of Charlie Chaplin’s Modern Times (1936), which shared Clair’s industrial age concern with the dehumanisation of the workforce and borrowed much from this film (despite Chaplin’s later protestations that he’d never seen it), not least the scene in which Louis, distracted by love, disrupts the whole assembly line by chasing after a half-finished record player he’s neglected to tackle. With an eccentric musical score by Georges Auric very much in its favour, Clair’s film is a delightfully daring and inventive comedy in its own right but also an extraordinary example of the breezy cross-pollination that went on between Hollywood and Europe in the early days of cinema.
Posted by Joe at 12:05