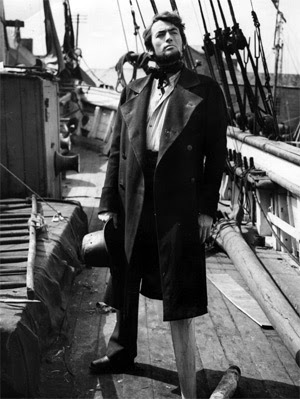 Gregory Peck’s monstrous Captain Ahab stands defiantly astride the deck of the Pequod in this superlative adaptation of Herman Melville’s Great American Novel. Despite its being attempted twice previously by Hollywood, the tome was long regarded as unfilmable. However, this didn't stop the ever-adventurous John Huston, who took the project on manfully and delivered a suitably epic opus of crashing waves, roaring typhoons, moonstruck madness and really big fish courtesy of a script co-written, acrimoniously, with science fiction novelist Ray Bradbury. Not recommended for landlubbers.
Huston and Bradbury cherry pick some of the finest scenes from the novel while necessarily dispensing with much of Melville’s long passages on leviathans, the proper way to boil blubber and other nautical matters. Ishmael (Richard Basehart) venturing into the Spouter Inn in New Bedford and meeting Stubb (Harry Andrews) and Polynesian harpooner Queequeg (Friedrich von Ledebur) over a tankard of shilling rum and a jig is one such example. Elijah the Prophet (Royal Dano) makes his ominous appearance at the docks on cue while the extraordinary sermon of Father Mapple on the fate of Jonah is also present and correct. Orson Welles cameos here, in a small but vital early appearance similar to his turn as Cardinal Wolsey in A Man For All Seasons (1966), speaking from a pulpit made from the prow of an old ship and giving a barnstorming rendition (see below). Welles would use his fee for the part to bankroll his own theatrical production based on the novel, Moby Dick-Rehearsed, a play-within-a-play then being staged at London’s Duke of York Theatre with an all-star cast. Peck himself would take the part of Mapple in a rubbish TV miniseries version of the yarn starring Patrick Stewart in 1998, following on from his similar lap of honour in Martin Scorcese’s Cape Fear (1991).
Although the film came in at double its original budget, eventually costing around $4.4m, it’s a sturdy piece of work that captures much of Melville’s poetry and offers a wholly authentic experience of sea-going life in the nineteenth century. Every creak of the ship, every strain of its ropes and every swoosh and clang of the crew’s flying lances helps capture the essence of this sun-beaten world of perpetual motion, salted air and sublime nature. Huston shot as much of the action as he could on location at real whaling grounds off the coasts of Spain and Portugal, using the town of Yougal in County Cork, Ireland, as the stand-in for New Bedford. Moby Dick himself was a 12 tonne, 75 foot model built by Dunlop Rubber in Stoke-on-Trent, UK, and apparently required 80 drums of compressed air as well as a fully-automated hydraulic system to stay afloat. Fans of vintage British cinema will be pleased to spot the likes of Bernard Miles and Noel Purcell aboard ship, the former a reliable hand with a literary adaptation and the latter something of a specialist in playing weathered sailors, while Scotsman James Robertson Justice also pops up in a small role as Captain Boomer, another seafarer who has lost a limb to the White Whale. Look out too for Mervyn Johns, Bob Cratchit in Brian Desmond Hurst’s Scrooge (1951), as a bewhiskered Peleg, the mate to whom Ishmael and Queequeg sign away their freedom.

Peck may not have been the original choice for the monomaniacal Ahab – that was Walter Huston, John’s father, who died before the project could be realised – but the star carries the film with a suitably angry, strained performance, his insanity only gradually revealed (although there’s also some strong support from Leo Genn as the troubled Starbuck). Peck does look unfortunately like Honest Abe Lincoln, which takes some getting used to, but rises above it and his demise, lashed to the side of the beast and beckoning his crew to join him in a watery grave, is as chilling a moment as it unforgettable.
Posted by Joe at 11:05