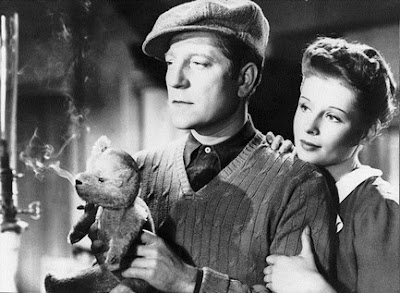 Another splendid exercise in romantic fatalism and spiritual desolation from the fruitful partnership between director Marcel Carné and poet Jacques Prévert that flourished during the French Golden Age. Like their previous collaboration with Jean Gabin, Les Quai Des Brumes (1938), and Renoir's La Règle De Jeu (1939), Le Jour Se Lève was blacklisted by the Vichy government for fear of its abiding pessimism contaminating the French public at a dangerous time. It would also be suppressed by Hollywood after the war in order to boost RKO's The Long Night, a 1947 remake starring Henry Fonda, Barbara Bel Geddes and Vincent Price. However, the original proved resilient and remains a classic. You can't keep a great film down.

In what may be his most archetypal role, Gabin plays everyman François, a sandblaster at a foundry who shoots a villainous love rival and hides out in his flat on the top floor of a shabby tenement building under siege from the police. The rest of the film occurs in flashback, as François barricades the door, chain smokes and recalls the events that led him to this unhappy state of affairs, beginning with his chance meeting with Françoise (Jacqueline Laurent), a pretty young florist whose innocence and naivety charms him. François pursues his near-namesake and fellow orphan and the pair fall in love. One evening, Françoise disappears and her lover follows her to a local night spot where she is watching a performing dog act. François takes an instant dislike to the dogs' trainer, a sleazy vaudevillian named Valentin (Jules Berry) who clearly has a prior relationship with the girl. Upset, François begins an affair with Valentin's jaded assistant (Arletty) but continues to run into the jealous older man, who is aware of his ties to Françoise. Their rivalry becomes increasingly bitter and leads to the confrontation in which Valentin is killed. In the present, François commits suicide just as the sun rises and the tear gas grenades rain down, the two women who loved him appearing among the assembled mob waiting below his window, heartbroken and powerless to intervene. 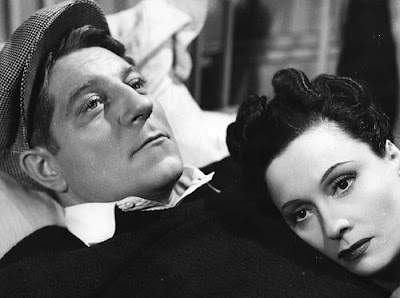 An exquisitely sombre piece of work, notable for its brooding central character, sympathy for the travails of the working stiff and distinctive sets, Carné's designers creating a provincial town whose alleyways, shop fronts and lone factory convey the same air of stifling hopelessness as the tower block in which Gabin's trapped murderer awaits his end. As marvellous as the star is here, the real revelation is Jules Berry as Valentin, an agent of evil and quite possibly the most appalling rodent ever to crawl onto celluloid. Valentin is as cruel and gleefully manipulative in his way as Dickens' poisonous dwarf Daniel Quilp in The Old Curiosity Shop (1841), a sneering decadent relishing his own odiousness and François' obvious disgust at his lies and dandyish affectations. Only a true monster could conjure such tragedy so casually.
Posted by Joe at 13:14