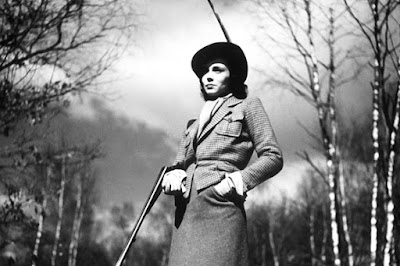 Mila Parély as Geneviève the jilted mistress in Jean Renoir's masterful La Règle Du Jeu, commonly regarded today as among the finest films ever made but widely misunderstood upon its release just prior to the outbreak of World War II. Indeed, audiences roundly booed early screenings of the film in Paris for its perceived lack of patriotism, causing it to be butchered at the censors' request and finally banned by the French and Vichy governments on the grounds that it was "demoralising". Renoir was hurt by this hostile reception and abandoned France for Hollywood as the prospect of war loomed over the land once more. The original negative was then destroyed during an Allied bombing raid and the work was feared lost before a fresh print was discovered in Germany and a painstaking restoration undertaken in 1959, leading La Règle Du Jeu to be reassessed and finally receive the acclaim it had always deserved. 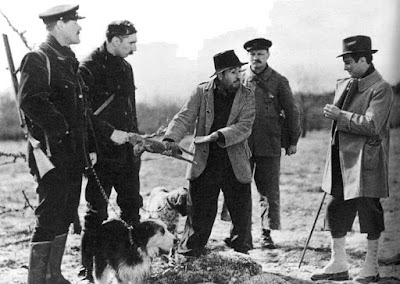 Renoir's film is essentially a tragicomic satire on the aristocracy of the Third Republic, who fail to engage with a changing world and its darkening skies and are preoccupied instead with idle hobbies and outmoded, artificial notions of class, propriety and social standing. Guests assemble at La Colinière, the country chateau of Robert de la Chesnaye (Marcel Dalio), for a weekend's shooting party while the camera follows the various romantic entanglements of the gentry and servants below stairs. Celebrated aviator André Jurieux (Roland Toutain), a national hero having just flown the Atlantic in 23 hours, is invited and pursues Chesnaye's Austrian wife Christine (Nora Gregor), with whom fellow guest Octave (Renoir himself) is also in love. All three are outsiders to the group for different reasons but are tolerated in spite of this. Their host, a collector of mechanical nicknacks, is meanwhile attempting to break off his affair with Geneviève without hurting her feelings. Matters are also complicated among the domestics, with poacher turned servant Marceau (Julien Carette) seeking an amorous liaison with Lisette (Paulette Dubost), Christine's maid and the wife of jealous Alsatian gamekeeper Schumacher (Gaston Modot). Their rivalry comes to a head after the day's shooting when Schumacher catches the pair together and chases Marceau around the house with a shotgun, an embarrassing farce for which the pair are promptly dismissed. The cuckold loiters around the grounds, however, devastated by Lisette's decision to stay with her mistress rather than leave with him, and makes a fatal error when he spies an assignation taking place in the estate's greenhouse involving a woman wearing his wife's cloak. 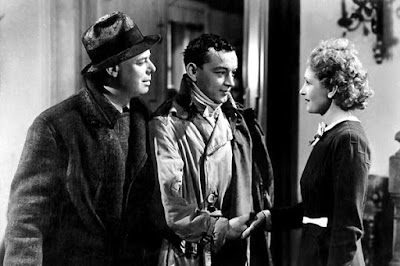 Images of death abound here, from the surreal skeleton dance during the evening's entertainment to the traumatic montage of cute little bunnies and fleeing pheasants being massacred for sport, both vivid metaphors for what was to come. Renoir's cast are uniformly excellent and clearly benefited from his patient coaching. The director himself gives a touching performance as Octave and was a great believer in the importance of appearing in front of the camera so that he could gain a better understanding of the demands he was placing upon his actors. This sympathetic approach provides a marked contrast with the likes of Alfred Hitchcock, who resented actors and famously dismissed them as "cattle", only ever appearing in his own films in joke cameos as a means of inscribing his signature upon his work. As great a technician and thriller director as he was, none of Hitchcock's films could be considered an ensemble piece and I'd argue that Hitch was incapable of producing a work as rich in character and subtleties as La Règle Du Jeu as a direct consequence of his dismissive attitude towards the actor's craft. Far more than an upstairs-downstairs comedy of manners of the sort popularised by Julian Fellowes in recent years - Robert Altman's Gosford Park (2000) and Downton Abbey on television - La Règle Du Jeu is an exquisite skewering of a privileged elite, its futile snobberies and codes, that merits repeated viewings. Watching Modot weeping alone in the night, leaning against a tree trunk for support as the gaiety continues inside, you realise how rare it is to see a grown man cry in films of this period. It's this sort of detail that makes La Règle Du Jeu so original and so special.
Posted by Joe at 09:29