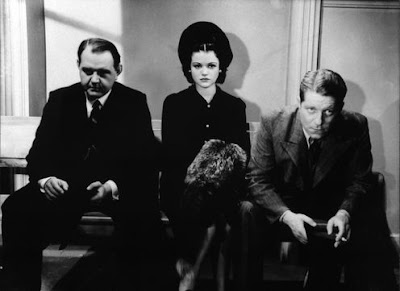 Fernand Ledoux, Simone Simon and Jean Gabin as the three corners of a desperate love triangle in Jean Renoir's heartbreaking melodrama based on the Émile Zola novel of 1890. Gabin stars as Jacques Lantier, a lonely train driver prone to psychotic episodes, who falls for Séverine (Simon), the wife of Le Harve's deputy stationmaster Roubaud (Ledoux), after they meet in the corridor of a passenger car on a trip to Paris Saint-Lazare during which a man is found murdered. The victim turns out to be the wealthy Grandmorin (Jacques Berlioz), a notorious lecher who had a relationship with Séverine's mother while she was working for him as a domestic. Lantier realises that Roubaud has slit the villain's throat in a fit of jealousy over his manipulation of Séverine, his god daughter, while she was underage. Lantier conceals his deduction from the police and pursues a friendship with the couple, watching them disintegrate through shared guilt. Lantier and Séverine fall for one another and plot to dispose of Roubaud so that they can be together before tragedy strikes. 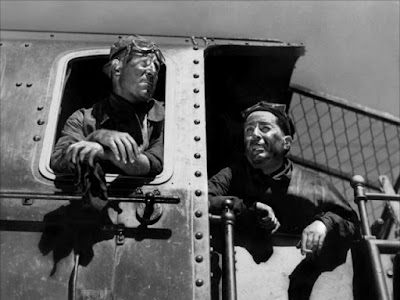 Renoir was reunited here with Gabin and comedian Julien Carette (above) after their triumph in La Grande Illusion (1937) and the trio again struck gold. Although Zola's story presented the director with a smaller canvas than the Great War, he nevertheless again rose beyond the conventions of genre to turn in a devastating human drama on a universal theme. Almost noirish at times, La Bête Humaine anticipates the likes of Double Indemnity (1944) and The Postman Always Rings Twice (1946) in leading a doomed couple to suppose that murder is the only way they can secure their happiness (an idea that also forms the core of Zola's 1867 novel Thérèse Raquin). Renoir though is more interested in the humanity of the situation than crime plotting and teases maginificent performances from Gabin as the tormented engineer who quite literally kills the thing he loves and from Simon, an actress cast for her "enchanting pekinese profile", according to the director, which he felt would help wrong-foot audience expectations. Of his star, Renoir wrote in his autobiography, "Gabin could express the most violent emotion with a mere quiver of his impassive face where another man had to shout to get the same effect... [He] could overwhelm the audience with a mere flicker of his eyelids." The director appears on screen himself here as Cabuche, the mercurial ex-con who is wrongly accused of the slaying of Grandmorin. 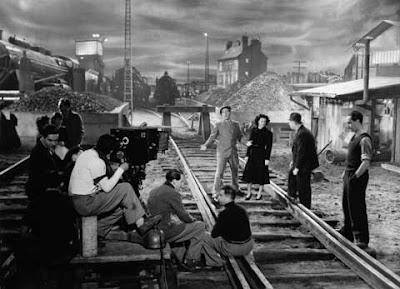 In his second Zola adaptation after Nana (1926), Renoir makes extraordinary use of real locomotives, offering us a thrilling rollercoaster ride early on by shooting in the first-person as "La Lison" tears through the countryside, dipping into tunnels at great speed and billowing coal smoke. A perilous business to be in but the director proudly recalled in 1974 that he only faked one shot in the entire film - agreeing to place matresses beside the track for Gabin's fatal leap at the end after the actor persuaded him that it might be best for the sake of the production if he were to survive the fall just in case they still needed him for reshoots. Other notable touches of brilliance come in the murder scene, which is entirely unseen, taking place behind drawn blinds, and the lovers' romantic first night together seeking shelter from the rain in an abandoned railway shed. Fritz Lang would remake La Bête Humaine as Human Desire in 1954 with Glenn Ford and Gloria Grahame, his second Renoir remake after turning La Chienne (1931) into Scarlet Street in 1945.
Posted by Joe at 21:10