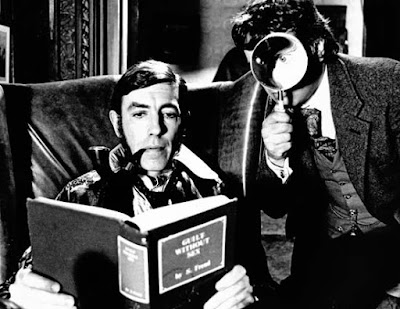 From the sublime to the utterly ridiculous. After a week of immersing myself in the very best of French cinema, I made the quixotic decision to seek out this travesty, unquestionably the worst of British. A spoof of the popular 1902 Arthur Conan Doyle novel starring Peter Cook and Dudley Moore as Sherlock Holmes and Dr Watson and directed by Andy Warhol collaborator Paul Morrissey, my hopes weren't high. However, I just couldn't resist a film with a supporting cast headed up by veteran greats Terry-Thomas and Joan Greenwood and boasting the likes of Kenneth Williams, Irene Handl, Hugh Griffith, Max Wall, Roy Kinnear, Penelope Keith, Prunella Scales and Denholm Elliot. But even with low expectations, I wasn't prepared for quite how piss-poor this turned out to be. Only Thomas, clearly unwell in his final screen performance, emerges from what stands as a chronic squandering of money and talent with any dignity whatsoever. Greenwood is positively degraded, Williams is creepier than ever in a sad caricature of himself and the rest have almost nothing to do. The jokes are non-existent, the sets are embarrassing, a grotesque parody of The Exorcist comes five years too late and the pissing chihuahua business goes on for far too long. Above all, there's just no heart being put into what might have been a pleasingly anarchic trampling on a literary classic. A distressing shambles. Sub-Hammer, sub-Python and even sub-Carry On. Wretched. 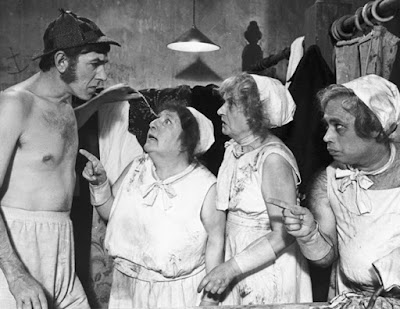 An early appearance by Spike Milligan is an ill omen, threatening the tedious Goon Show mugging and silly voices you certainly get, although his cameo as a policeman is mercifully short. Cook adopts a nasal, East London Jewish twang for Holmes while Moore spends most of the film grappling with a preposterous Welsh Valleys accent - one wonders what co-stars Handl and Griffith made of these unfunny affectations. Cook, one of the most naturally gifted wits England has ever produced, looks bored from the off, leaping at the opportunity provided by Conan Doyle's plot to absent himself from proceedings early on by handing the case over to Moore's Watson so that he can bugger off to a brothel (above). His lack of interest in the project is nakedly apparent and compounded by the decision to shoehorn-in haggard old Beyond The Fringe routines such as the One Legged Tarzan sketch for no other reason than the want of any fresher material. The stench of laziness and indifference haunts the whole production - it's astonishing that Cook and Moore cared so little about quality control because a film this bad could easily have sunk a lesser brand. This may just be the worst film I've ever seen. The dog, at least, deserved better. For god's sake get hold of the 1939 Fox version with Basil Rathbone and Nigel Bruce instead.
Posted by Joe at 10:28