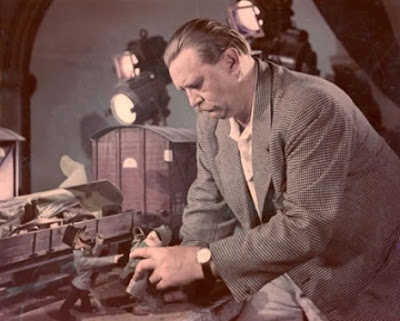 Here's Czech animator Jiří Trnka, "the Walt Disney of the East", working on his stop-motion version of Jaroslav Hašek's legendary comic novel The Good Soldier Švejk (1923), currently showing as part of a Trnka retrospective at London's National Film Theatre that you are strongly advised to check out. An artist known for bringing Czech folk stories and fairy tales to the screen through lovingly crafted puppet animations, Trnka here attempted the mammoth task of adapting Hašek's lengthy story of a hapless infantryman into a series of short features and succeeded admirably. True to the spirit of a cherished book and to the style of its original illustrations by Josef Lada without being overly precious about either, Trnka wisely chose three typical episodes from the source for his three part Švejk cycle rather than attempting to tackle the whole thing. A shrewd move as Hašek's book, a scathing satire of the Austro-Hungarian officer class and a tribute to the redoubtable spirit of the Czechs forced to serve in the empire's war machine, includes over 200 characters with whom its protagonist interacts. 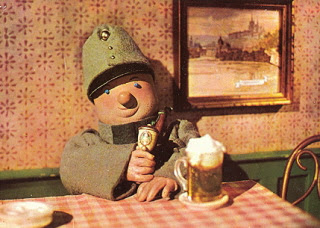 We first meet the imperturbable Švejk in part one of Trnka's trilogy failing to acquire a bottle of bootleg brandy for a commanding officer he has exasperated with endless anecdotes. In part two, Švejk is tossed from a train and forced to make his way back to camp on foot through the snow, getting lost innumerable times along the way, before being arrested as a Russian spy by his own side in the glorious concluding act. The result is huge fun, an ode to beer and buffoonery that is both cheerily slapdash and filled with carefully chosen detail. The mustaches and brows of the puppets bristle and wrinkle in fury, their newspapers flap, their handwriting trails off into doodles after one drink too many while smoke rings waft from Švejk's pipe as he sways drunkenly before the generals he is failing to explain himself to. The filmmaker would go on to satirise the oppressive totalitarian rule of the USSR in his most daring work, The Hand (1965), for which he is fondly remembered as a hero in his homeland.
Posted by Joe at 09:03