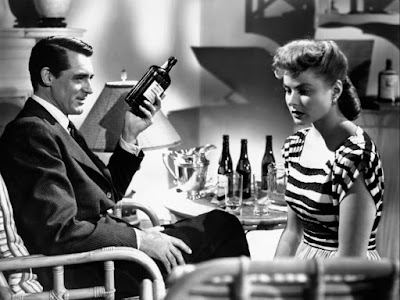 Cary Grant's deeply compromised US intelligence agent Devlin shares a drink with Ingrid Bergman's Alicia Huberman, the daughter of a Nazi war criminal whose guilt he preys on in order to convince her to go undercover and help smoke out fugitive members of the "German gentry" holed up in Rio de Janeiro in the aftermath of WWII. Alfred Hitchcock's sublime espionage thriller for RKO conjures great quantities of suspense, peril and menace without a single shot fired and benefits from two exquisite leads and a moving and sad supporting performance from Claude Rains as Alexander Sebastian, the ageing conspirator Alicia is brought in to entrap.

Hitchcock's film was highly topical upon its release a year after Hiroshima, the exiled Nazis' plot revolving around the hoarding of uranium ore in a Rio mansion in order to develop atomic bombs of their own. Allegedly, Hitch and his screenwriter Ben Hecht were placed under surveillance by the FBI after visiting the California Institute of Technology to research this explosive subject though the Feds needn't have bothered. It's all a MacGuffin: the ore, the Nazis, the whole spy caper. What's really going on here is the tortuous love affair between Devlin, a suave but repressed cove who admits to being "afraid of women" and hides behind his patriotism even when his government asks him to pimp out the one he loves to the enemy, and Alicia, a damaged, intemperate drinker desperate for redemption. Both Grant and Bergman are superb and the drama comes in watching how far Devlin will allow Alicia's mission to go, how much suffering he can watch her endure before stepping in to intervene and admit his love. Rains' performance as Sebastian, completing the triangle, complicates the issue, as the actor manages to instil real charm and sympathy into a character we expect to despise. An early instance of a Hitchcock creation stifled by an overbearing mother (Leopoldine Konstantin), Sebastian knows the lengths his accomplices will go to to eradicate any threat to their operations but can't help his infatuation as old age dawns. Having said that, he does ultimately try to poison Alicia with spiked coffee to save his own skin, so the door closing on him as Devlin and the girl escape at the film's close rightly leaves him to the mercy of his nefarious colleagues.
The theme of state-sponsored prostitution and the callous and hypocritical disregard of spymaster Paul Prescott (Louis Calhern) and his cronies for Alicia's fate makes for a shocking statement, especially in 1946 when America's status on the international stage was hardly up for scrutiny. A world in which such a fearless soul should be sold into sex slavery for political gain with little more than a shrug is a dark one indeed. The spying game wouldn't look this murky and amoral again until John Le Carré.
Original producer David O. Selznick had insisted on casting Joseph Cotten as Devlin but Hitch pushed for Grant, a counter-intuitive choice that eventually won the day, though Cotten would get to play the role for the Lux Radio Theater two years later. Following Grant's appearance in None But The Lonely Heart (1944), adapted and directed by socialist playwright Clifford Odets, the FBI (always busy) had issued a memoranda entitled 'Communist Infiltration Of The Motion Picture Industry' in which the bureau expressed concerns about the film, which it regarded as provocatively anti-capitalist. As such, the independent-minded Grant was becoming well acquainted with being regarded as an object of suspicion and gossip, especially regarding his personal life, and proved a fine fit for the part. He would remain firm friends with Bergman for many years afterwards and was one of the few Hollywood people to speak out on her behalf following the scandal surrounding her affair with Italian director Roberto Rossellini in 1950. Selznick did get his way with one important casting decision on Notorious, however, preferring Rains over Hitch's original choice of Clifton Webb. The director by and large had his own way on set as Selznick soon turned his attentions to King Vidor's Western Duel In The Sun (1946) and the result is filled with what would become classic Hitchcockian tropes, not least men seeking to exert control over a troubled woman and the abuse of trust. The virtuoso crane shot roaming down the stairs before closing in on the key in Alicia's hand is justly celebrated and the use of champagne bottles during the party scene, quickly disappearing from the ice bucket and creating a countdown to the head waiter's descent into the same wine cellar that Devlin and Alicia are seeking to infiltrate, is an ingenious suspense device and a telling moment for Hitchcock to make his signature cameo. Also worthy of note is Notorious's intricate kissing scene, in which Grant repeatedly pulls away from his delectable co-star to mutter into the telephone, which was written by the director to mock Production Code rules that no screen kiss could last longer than three seconds. The result is one of the most intimate clinches in cinema. 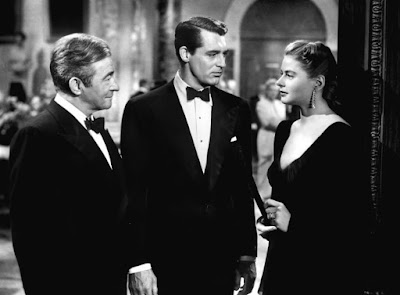 Its premise very loosely inspired by a John Taintor Foote short story published in the Saturday Evening Post in 1921 entitled 'The Song Of The Dragon', Notorious helped create the template for the modern spy romance and was shamelessly ripped-off in John Woo's Mission: Impossible II (2000), which lifted the film's plot wholesale and then tried to cover its tracks with a feeble "homage" by recreating Hitch's tense racecourse scene with an embarrassed cough. This is standard practice in Hollywood, unfortunately, where executives tend to assume they are free to recycle material from older films because audiences interested in brainless action blockbusters simply won't have seen them. See the obvious lifting from The African Queen (1951) in the first Pirates Of The Caribbean installment (2003) or, worse, the complete relocation of Casablanca (1942) to a dystopian future in the laughably inept Pamela Anderson vehicle Barb Wire (1996). Actually, don't. Avoid them at all costs.
Posted by Joe at 12:53