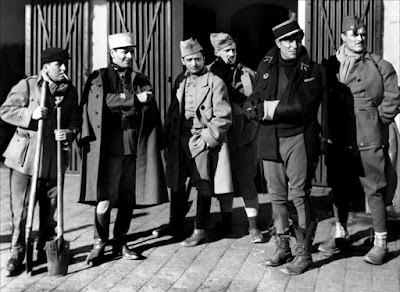 French director Jean Renoir, son of leading Impressionist painter Pierre-Auguste Renoir, served as a pilot during World War One and brought his experiences to the screen in this seminal anti-war picture starring Jean Gabin, Erich von Stroheim, Marcel Dalio, Pierre Fresnay and Dita Parlo. Along with La Règle Du Jeu (1939), La Grande Illusion is probably his masterpiece and as fine an example of the “poetic realist” style as you could wish to find. Unlike other screen depictions of the Great War, Renoir’s film is unusual in that it focuses in on the relatively humane conditions experienced by prisoners of war in German camps rather than the squalid realities of trench warfare. La Grande Illusion contains no grandstanding speeches or universal pleas. Renoir’s concern is not with decrying the horrors and mechanised violence of conflict but with underlining its complete futility through the presentation of realistic characters that have much in common, not least their basic humanity and social class ties, despite being on opposing sides nationally and politically.

Here’s the very charming Renoir himself explaining it much more effectively than I ever could for La Grande Illusion’s theatrical re-release in 1958:


The film’s plot concerns the capture of two French aviators, Maréchal (Gabin), a mechanic in civilian life, and the upper-crust Captain de Boeldieu (Fresnay), after they are shot down over Germany by Captain von Rauffenstein (Erich von Stroheim). The latter is courteous to his adversaries, especially de Boelideu whom he recognises as a member of the same fading European elite as himself, and invites the pair to dinner before despatching them to prison. There, Maréchal and de Boeldieu meet other French inmates and plot to dig an escape tunnel, the men keeping each other’s spirits up by putting on a variety show with the help of group joker Cartier (Julien Carette). Before the prisoners can make their escape, however, they are disbanded and sent to other camps, with Maréchal, de Boeldieu and Austrian Jew Rosenthal (Dalio) packed off to the mountain fortress of Wintersborn, now being commanded by von Rauffenstein. Though the Captain is again sympathetic, de Boeldieu hatches a plan so that Maréchal and Rosenthal can escape, forcing von Rauffenstein to shoot him in the process, a situation the officer regrets gravely. Maréchal and Rosenthal take to the hills and find salvation with a lonely German widow (Parlo) keeping a farm near the Alps, with whom Maréchal falls in love. The fugitives are reluctantly forced to push on into Switzerland, however, and it remains unclear at the film’s close whether the lovers will live to be reunited. 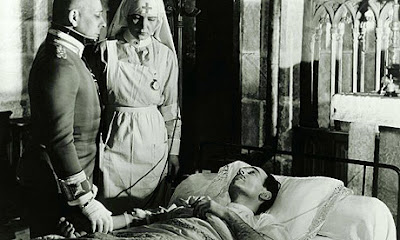 Gabin is as splendid as ever in another trademark role and his minimalist acting style contrasts nicely with that of classically-trained stage actor Fresnay and earthy comic Carette. Von Stroheim too is extraordinary. Probably best known to American audiences as Max the butler from Sunset Boulevard (1950), the great silent director breathes centuries of history into von Rauffenstein, a man who understands that the world he knows and the codes of honour he lives by are gradually being blown away and that he’s already missed the most fitting end for a gentleman of his class and breeding – tumbling from the sky in an explosion of fire and glory ("For a commoner, dying in a war is a tragedy. But for you and me, it's a good way out", de Boeldieu tells him). Banished to a remote Gothic castle in the mountains like some ancient ghoul and forced to shoot one of the last of his own kind in Captain de Boeldieu, von Rauffenstein is sighing for the end behind his rigid military demeanour and von Stroheim’s performance is unforgettable. La Grande Illusion obviously looks forward to the coming of World War Two as well as back to the circumstances of its predecessor and as such was instantly banned in Germany upon it release, with Joseph Goebbels pronouncing Renoir, “Cinematic Enemy Number One”. It was also blacklisted in fascist Italy under German pressure, despite its winning a prize at the Venice Film Festival and Mussolini apparently harbouring a deep personal fondness for it. Film fans will recognise a tribute to La Grande Illusion in Casablanca (1942) in the scene in which the patrons of Rick's Café Américain rise up and sing 'La Marseillaise' in defiant fashion.
Posted by Joe at 12:42