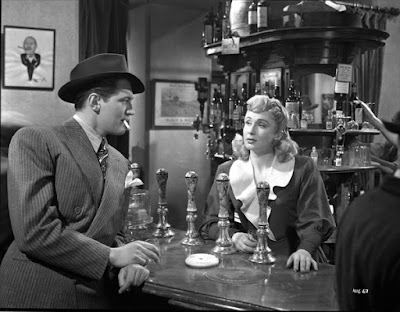 Australian John McCallum and Googie Withers are the star-crossed lovers in this bleak but beautiful British post-war kitchen sink noir from Ealing, a film as gloomy as its title about a Bethnal Green housewife whose drab, suffocating existence is turned upside-down by the return of Tommy Swann, an old flame on the run from the police after escaping from Dartmoor. The actors were real-life husband and wife having met on the set of Edwardian melodrama The Loves Of Joanna Godden earlier that year and both are on fine form, sharing a simmering chemistry charged by revived hopes and a hunger for what might have been. Withers in particular carries the picture as Rose Sandigate and reminds us what an underrated actress she was. A former barmaid who lost the great love of her life when Tommy disappeared, Rose has since surrendered herself to a marriage with a complacent older widower (Edward Chapman) and a lifetime of domestic drudgery and resentment from his daughters, trapped in her own prison of floral wallpaper, net curtains and hot stoves. Withers captures Rose's bitterness and deprivation to a tee. The press coverage that followed her death in July last year was nowhere near sufficient.


Shot by Robert Hamer, who would go on to make Kind Hearts & Coronets (1949), and adapted from Arthur La Bern's novel by the director with Angus MacPhail and Henry Cornelius, It Always Rains On Sunday makes for an invaluable record of East London in the late forties. Captured in a crisp, documentary style by cinematographer Douglas Slocombe, the film presents a working class world of boozers and bovver populated by cockney crooks, market traders and barrow boys, Jewish jazz musicians and wry bobbies on the beat. The local colour is fascinating and brought to life by an experienced studio cast including such names as Jack Warner, Sydney Tafler, John Slater, Alfie Bass, Vida Hope, Edie Martin and Hermione Baddeley, each with their own sub-plots and quirks. The ending, in which the police close in on Swann and pursue him across the railway sidings, arguably jars somewhat with the slow-burning, sometimes Hitchcockian tension that has preceded it but does make for an exciting injection of action worthy of Carol Reed. A great British noir then, but also something of a proto-EastEnders.
Posted by Joe at 13:57