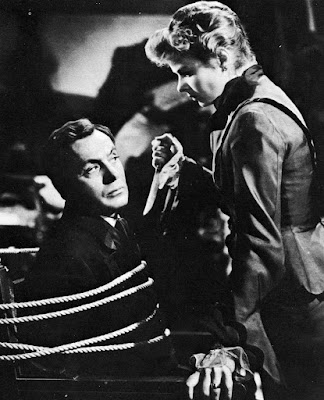 MGM's lavish Victorian melodrama based on the hit stage play by British writer Patrick Hamilton followed so closely on the heals of Thorold Dickinson's 1940 UK version that the American studio tried to buy up as many copies of the original as it could in order to destroy the negatives. They didn't entirely succeed but Dickinson's film is not so easy to see these days as it might have been as a direct result of the studio's decidedly unsporting conduct. While that is undeniably a crying shame, there's still plenty to enjoy in George Cukor's Gaslight, not least the opulent sets lashed with murk and fog and two enjoyable supporting turns from a ghoulish Dame May Whitty and a surprisingly menacing Angela Lansbury in her screen debut. The stars of the show though are of course the Oscar-winning Ingrid Bergman at her most fragile and hysterical and Charles Boyer at his most deliciously devilish. For those who haven't seen it, the story concerns Paula Alquist (Bergman), a naive young newly-wed who witnessed the strangulation of her aunt, a well-known opera singer, some years earlier and who reluctantly consents to move back into the same London townhouse where the crime took place, which she has since inherited, at the instigation of her controlling husband Gregory (Boyer). Paula becomes increasingly unwell and preoccupied with the past during their stay but is all as it seems or is Gregory systematically trying to undermine his wife's psychological well-being for his own nefarious ends? Only kindly Joseph Cotten, an old admirer of Paula's aunt, can get to the bottom of the mystery but will he be too late? Dun-dun-durrr!
Posted by Joe at 15:46