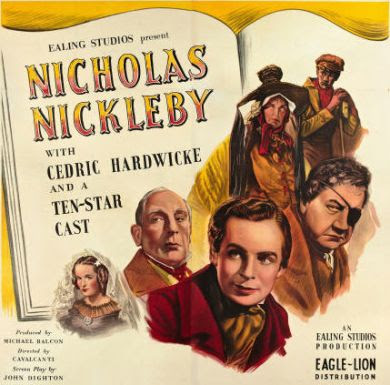 Last Tuesday marked the 200th anniversary of the birth of Charles Dickens, probably the greatest writer ever to reach for a feathered quill and embark upon a novel. In honour of this literary Titan, I thought I'd dig out this old Ealing version of his beloved 1839 Bildungsroman, The Life & Adventures Of Nicholas Nickleby, directed by Alberto Cavalcanti, his final picture for the studio. Often unfavourably compared with David Lean's faultless Great Expectations a year earlier, Cavalcanti's film actually stands up remarkably well. Dickens adaptations proved popular with post-war cinema audiences in the forties because they discussed hardship, want and deprivation, themes all too familiar in an austerity climate and perhaps why the author's bicentennial has struck such a chord in 2012. 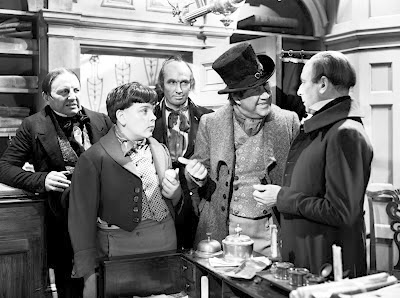 Nicholas Nickleby's title character (played here by Derek Bond) is a young man who has recently completed his education and, along with his mother (Mary Merrall) and sister Kate (Sally Ann Howes), been cast into the hands of his cruel and miserly Uncle Ralph (Cedric Hardwicke) following the death of his father. Ralph Nickleby proceeds to ship young Nicholas off to a teaching post at Dotheboys Hall in Yorkshire, a grim little boarding school for boys where nourishment is scarce but violent corporal punishment dished out liberally by its tyrannical proprietor, Wackford Squeers (Alfred Drayton). Nickleby takes exception to a particuarly vicious beating Squeers inflicts upon one haunted student, Smike (Aubrey Woods), and intervenes, after which master and pupil depart together. Abandoned by his uncle, Nicholas tries various lines of work before meeting flamboyant actor Vincent Crummles (Stanley Holloway) and his itinerant theatre troupe. He and Smike join the company and prove a success but Nicholas is soon called away to aid Kate, whom Ralph is surreptitiously seeking to pimp out to two sleazy business associates. Nicholas must finally confront his odious guardian and prevent him from blackmailing the lovely Miss Bray (Jill Balcon, daughter of studio boss Michael and later mother of Daniel Day-Lewis) into marriage in exchange for cancelling her pauper father's debts. 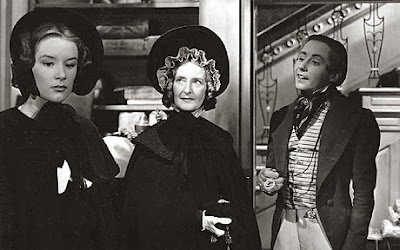 John Dighton's screenplay necessarily makes a number of sacrifices in condensing Dickens' weighty doorstop into a feature length costume drama but it's an admirable effort. A story with a great deal more threads and characters to it than Great Expectations (1861), Cavalacanti's film may not succeed in navigating the novel's more soapy plot developments entirely smoothly and Bond is only so-so in the lead but there are some wonderful character turns to relish. Hardwicke, Holloway, Drayton and Bernard Miles (a veteran of Lean's film, in which he made for a heart-breaking Joe Gargery) are clearly enjoying themselves and there are some fabulous bit-parts for the likes of Vida Hope as Squeers' spoiled daughter, Timothy Bateson and Cecil Ramage as Lord Verisopht and Sir Mulberry Hawk respectively, Cyril Fletcher as the winsomely foppish Mantalini and James Hayter, playing twins 63 years before Armie Hammer as Ned and Charles Cheeryble. All look as though they have stepped straight out of a Phiz illustration and more from any or all of them would have been welcome. Not perfect then but a convincing portrayal of a society riddled with hypocrisies, monsters and injustice and all the more of a pleasure for that. Dickens and Ealing were always going to be made for one another like hot chops and sauce.
Posted by Joe at 09:38