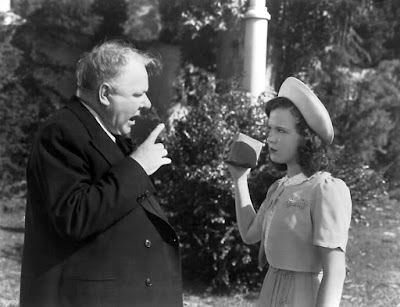 Before old age and a lifetime of glugging red eye caught up with him, W.C. Fields' final performance in a starring role was this extraordinarily surreal and postmodern comedy classic from Universal about the Great Man's efforts to pitch his latest wild script to the head of "Esoteric Pictures" (Franklin Pangborn).

Fields is introduced standing back to admire a billboard advertising his own previous film, The Bank Dick (1940), and appears, along with Pangborn and MGM starlet Gloria Jean, under his own name as a fictionalised version of himself, just as Larry David would in Curb Your Enthusiasm 60 years later. Following a subsequent altercation with a passing couple and a sub-standard breakfast, Fields drops his niece (Jean) off at the studio where she is singing soprano in a lame new musical currently in production and heads over to Pangborn's office to attend a story conference at which his new screenplay is read aloud with increasing bemusement and horror by the executive. Its plot turns out to involve Fields and Gloria Jean catching a flight on an innovative modern passenger aeroplane complete with its own open-air rear observation area, from which Fields is forced to leap heroically in mid-flight to rescue a bottle of liquor he has accidentally knocked over board. Plummeting to earth, he lands safely within the grounds of a mountaintop "nest" high up above a nearby Cossack village that plays home to the harshly eye-browed Mrs Hemogloben (Marx Brothers foil Margaret Dumont), an embittered single mother determined to raise her naive but beautiful daughter (Susan Miller) entirely apart from the world of men. Fields is attracted to the girl and attempts to seduce her with a kissing game before learning that Mrs Hemogloben herself is extremely wealthy. He returns a day later in elegant attire to propose to the elder matron before Gloria Jean manages to dissuade him, at which point Pangborn's frustration becomes too great and he kicks Fields out without a penny: "That's all! That's enough! That's too much! Aeroplanes with sun decks! Russian villages in the sky! Gorillas playing Post Office!" The Great Man retires to a local ice cream parlour, turning to the camera briefly to explain that the scene was supposed to be staged in a saloon before the censor intervened. Having blown the frothy head off a peach sundae and wrestled half-heartedly with the scoops inside, Fields abandons the dessert altogether and heads off into Los Angeles for one final adventure. 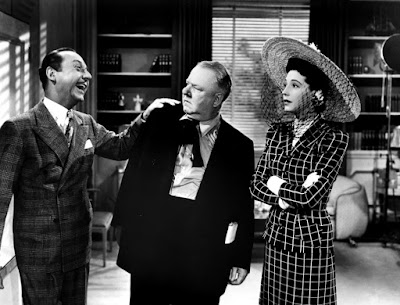 While the devices of narrative interruption and digression might have their origins in Laurence Sterne's legendary comic novel The Life & Opinions Of Tristram Shandy (1759-67), Never Give A Sucker An Even Break's behind-the-scenes depiction of the entertainment industry and the frustrations endured by creative types at the mercy of studio meddling is as contemporary as 30 Rock (2006-). W.C. was always way ahead of his time and there's no better example than this. One wonders what "impossible, inconceivable" Swiftian fantasies he might have served up had he really been given the creative freedom and budget his talents deserved. As inventive and freewheeling as Never Give A Sucker... is, however, there are a few bits of business recycled from elsewhere in his oeuvre, which ultimately turns the film into something of a greatest hits package. Fields had had trouble with bulky, moustached foreigners in confined carriage corridors before in The Old Fashioned Way (1934), seen his morning shave interrupted by inconsiderate others in It's A Gift (1934) and run into parking-related misunderstandings with the cops in Man On The Flying Trapeze (1935). The Bank Dick ended with a madcap car chase and so does this one, with Fields doing his very best to chauffeur a large but definitely not pregnant lady across town to the nearest maternity hospital at high speed. However, we can hardly begrudge a man responsible for such a glorious comic legacy a final lap of honour now can we?


The above scene is perhaps Never Give A Sucker's... highlight and a truly great encounter, Fields meeting his match in the surly person of Jody Gilbert, one tough waitress. A common gripe raised against the Great Man is his frequently unflattering treatment of women but Gloria Jean was only the last of many sympathetic nieces and daughters appearing in his films and he is as generous here in allowing Gilbert her fair share of the laughs as he was with Mae West in My Little Chickadee (1940).
Posted by Joe at 10:38