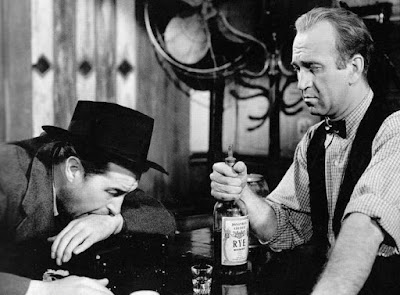 A craven Don Birnam (Ray Milland) begging sympathetic bartender Nat (Howard Da Silva) for one final shot of rye on the house in Billy Wilder’s masterful adaptation of Charles R. Jackson’s 1944 social issue novel The Lost Weekend. Milland gives an absolutely towering performance as Birnam, a New York alcoholic tormented by his failed ambition to become a novelist who ducks out of a trip to the country organised for him by his concerned brother Wick (Philip Terry) so that he can dry out in order to indulge his addiction. Scheming, stealing and conniving his way from shot glass to quart and sliding into ever greater depths of drunkenness, depravity and self-loathing, Birnam’s is a descent into in an everyday hell, ending with his incarceration in an alcoholic ward run by a cynical male nurse (Frank Faylen) who’s seen it all before. Milland, looking for all the world like a degenerate Cary Grant, brings a frantic cunning to Birnam, a resourcefulness born out of desperation, his innately sinister eyes flicking around every room he enters in search of his next drop or hiding place, a sadly reduced creature and something less than a man.

Wilder and co-writer Charles Brackett embarked upon their adaptation in the wake of the director’s eventful collaboration on the script for Double Indemnity (1944) with crime novelist Raymond Chandler, who was then undergoing treatment for his own chronic drink problem. Wilder was thus interested in making The Lost Weekend as a means of holding a mirror up to Chandler and of portraying on screen the true reality of an affliction that would not be classified as a disease by the American Medical Association until 1956, a decade after the film was released to such acclaim. In treating alcoholism as a mental illness rather than an indicator of a weak or intemperate character, The Lost Weekend was wildly ahead of its time. Drunkenness on film had almost always been played for laughs, an easy excuse for pratfalls, hiccups and staggering since the silent days. W.C. Fields may have been celebrated for his love of liquor and mock horror at the very prospect of drinking a glass of water but we rarely see him hungover in his movies and the Great Man’s tippling caught up with him in the end: he died the year after The Lost Weekend was released from a stomach hemorrhage. Wilder’s film remains a mature and nightmarish depiction of the condition and though it might not succeed in unnerving modern audiences accustomed to the shock tactics of more recent addiction dramas like Darren Aronofsky’s Requiem For A Dream (2000), the scene in which Milland endures his horrid hallucination of a bat devouring a dormouse is simply unforgettable and a clear inspiration for the baby-on-the-ceiling cold turkey fever dream sequence in Danny Boyle’s Trainspotting (1996). Another later echo of the film, incidentally, can be found on jazz performance poet Gil Scott-Heron’s 1974 album Winter In America, where the rap pioneer presents his own piece of social commentary on alcoholism also called ‘The Bottle’, perhaps a nod to Don Birnam’s aborted masterpiece. 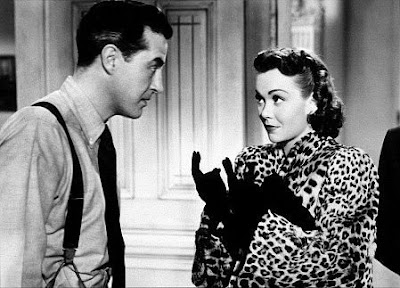 As well as a case study of a schizophrenic, out-of-control drinker, Wilder’s film has plenty to say about a society that encounters the problem of alcoholism everyday and refuses to take it seriously and an economic system that puts sales ahead of personal morals: Nat the bartender keeps on pouring Don slugs because necessity overrules his conscience. The Lost Weekend is also a powerful assault on the much-romanticised myth of the self-destructive artist, a universal fantasy typified in the US by the likes of Hemingway, Fitzgerald and Dashiell Hammett. Rarely do we read of such titans begging in liquor stores, waiting for the pawn shops to open or screaming in the night, as Don Birnam does. Birnam may be difficult-but-brilliant but he’s also less than endearing, showing a callous and ungrateful disregard for his brother’s kindness and patronage and the unconditional love and support he receives from his girlfriend Helen (Jane Wyman). His embittered speech about the failure of his writing career maps out an all-too-plausible life of disappointment and frustration:

"You see, in college I passed for a genius. They couldn’t get out the college magazine without one of my stories. Boy, was I hot. Hemingway stuff. I reached my peak when I was 19. Sold a piece to the Atlantic Monthly. It was reprinted in the Readers’ Digest. Who wants to stay in college when he’s Hemingway? My mother bought me a brand new typewriter and I moved right in on New York. Well, the first thing I wrote, that didn’t quite come off. And the second I dropped. The public wasn’t ready for that one. I started a third, a fourth, only about then somebody began to look over my shoulder and whisper, in a thin, clear voice like the E-string on a violin. Don Birnam, he’d whisper, it’s not good enough. Not that way. How about a couple of drinks just to put it on its feet? So I had a couple. Oh, that was a great idea. That made all the difference. Suddenly I could see the whole thing – the tragic sweep of the great novel, beautifully proportioned. But before I could really grab it and throw it down on paper, the drink would wear off and everything be gone like a mirage. Then there was despair and a drink to counterbalance despair and one to counterbalance the counterbalance. I’d be sitting in front of that typewriter, trying to squeeze out a page that was halfway decent and that guy would pop up again..."

French critic Nino Frank categorised The Lost Weekend as a film noir in his seminal essay, ‘Un Nouveau Genre “Policier”: L’Aventure Criminelle’, which was published in L’Écran Français in August 1946 and helped coin the term. Wilder’s film certainly shares the genre’s themes of entrapment and existential crisis, if not its murders and mystery. The noir it perhaps most resembles is Fritz Lang’s Scarlet Street (1945), which also deals with a man driven to extremes by a lifetime of hindered creativity. However, there is perhaps an equally good case for the picture to be considered a horror film. Milland would become known for horror roles later on in his career through such films as The Premature Burial (1962), X: The Man With X-Ray Eyes (1963), The Thing With Two Heads (1972) and Terror In The Wax Museum (1973) and is certainly mighty intense here. There’s also Wilder’s surreal and unsettling hallucination scenes and his camera plunging us face-first into a sickly, sticky glass of whisky as well as Miklós Rózsa’s eerie theremin score to consider, the latter giving the film a queasy feel that aurally anticipates the great science-fiction B-movies of the fifties. Perhaps only The Lost Weekend’s upbeat ending spoils the idea, though how genuine Don Birnam’s promise to start over with a clean page in his typewriter is remains open to question. It could just be another empty promise, another brief lucid interlude in his unhappy existence.
Posted by Joe at 20:14