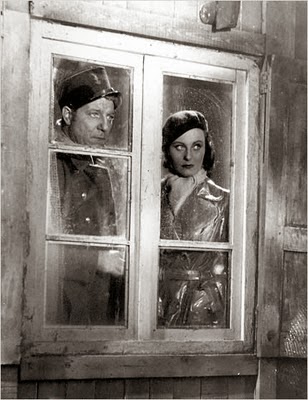 Another very fine moment in French cinema, this erratic but brilliant existential noir from writer-director team Jacques Prévert and Marcel Carné stars Jean Gabin as another doomed but philosophical outsider, this time a deserter haunted by his experiences with the French colonial army who rears out of the mist to hitch his way to the Port of Le Havre in the hope of finding passage to a new life on one of the departing freighters bound for South America. On the way, a stray drunk and a mongrel puppy guide Jean to a ramshackle tavern on the beach where he encounters a number of strange characters including suicidal artist Michel Krauss (Robert Le Vigan); the proprietor (Edouard Delmont), a kindly fellow fixated on his misspent youth in Panama; and, most importantly, Nelly (Michèle Morgan), a 17 year old local beauty whose boyfriend Maurice has recently disappeared. When a car-full of gangsters rocks up in pursuit of Zabel (Michel Simon), Nelly's guardian, Jean is initially nonplussed but later slaps around their petulant man-child of a boss Lucien (Pierre Brasseur) for bullying Nelly, with whom he has fallen in love, a piece of chivalry that will ultimately have fatal consequences. Meanwhile, the artist has finally taken the plunge and ended it all, bequeathing his passport, a suit of clothes and 850 francs to Jean so that he can make his escape to Venezuela under an assumed identity. However, our boy is torn about leaving Nelly behind and has found himself framed by circumstance for the murder of Maurice after the latter's body is dredged up from the harbour alongside the army uniform Jean previously discarded. What's more, Lucien's on his tail gunning for revenge and the real killer's still on the loose. 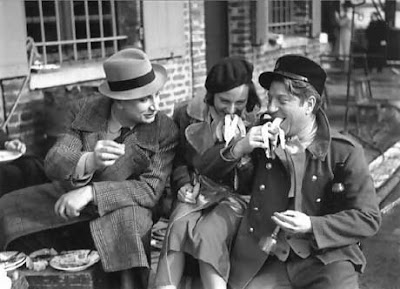 Based on a novel by Pierre Mac Orlan, Le Quai Des Brumes marked the first of four collaborations between Gabin and Morgan, who apparently became involved on set but never pursued an affair because the former happened to be a married man at the time. However, their chemistry together on screen is as clear and undeniable as it is in the picture above, taken during a lunch break on the film's location shoot in Le Havre. Gabin had slowly become a symbol of working class integrity and a fatalistic icon over the course of the thirties by delivering big performances in such films as Pépé Le Moko by Julien Duvivier and Jean Renoir's La Grande Illusion (both 1937) and helped get this classic of "poetic realism" off the ground when producers baulked at its downbeat subject matter. His signature character was surely cemented here through his portrayal of a man coming to terms with the idea that destiny is as inescapable as the creeping fog of this "port of shadows", a notion that would have chimed with contemporary French audiences staring the prospect of war with Germany in the face. Gabin's star would only soar higher the following year when he appeared in another trademark outing, Le Jour Se Lève, also scripted and directed by Prévert and Carné, who would go on to make their masterpiece, Les Enfants Du Paradis, seven years later. As well as the romantic leads, Le Quai De Brumes also boasts Michel Simon, France's premier character actor of the day, as the seemingly harmless gift shop owner and church music enthusiast Zabel, really a beast tragically unable to keep a rein on his true monstrousness. In truth, his psychodramatic sub-plot and the development of the burgeoning relationship between Jean and Nelly in the film's second half end up leaving the criminals and eccentrics from the first a tad sidelined, though this somehow doesn't matter over all. Carné's gloomy mood piece is superbly complimented by Maurice Jaubert's theme, emphatically echoing the raging of the sea, and apparently once prompted a spokesman for the Vichy government to publicly blame the film for lowering the morale of the French populace at a pivotal moment: "If we lost the war, it was because of Le Quai Des Brumes". Remarkable.
Posted by Joe at 21:20