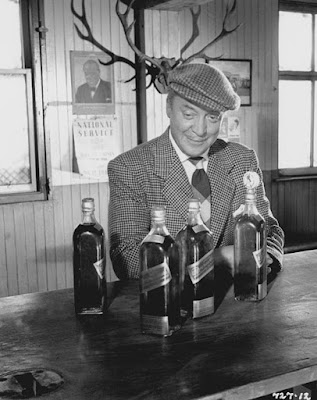 A sight for sore eyes. Basil Radford's fastidious Home Guard commander Captain Waggett contemplates the few legitimate bottles of Scotch still up for sale on the Outer Hebridean Isle of Todday during the chronic wartime shortage that besets the place in Alexander Mackendrick's debut film, an adaptation of Compton MacKenzie's charming 1947 novel of the same name. While Waggett (a clear influence on Arthur Lowe's Captain Mainwaring in the BBC's immortal sitcom Dad's Army, 1968-77) desperately tries to instil some English discipline into the local crofters and fishermen, depressed and inconsolable about being deprived of their "water of life", the poor blighter loses control entirely when the S.S. Cabinet Minister is wrecked off its coast, haemorrhaging a cargo of 50,000 cases of good whisky from its hull, at which point the locals gang together to steal it and make merry. Waggett is appalled, preferring to return contraband state property to the Crown (he being the sort of pompous buffoon who complains about "obstructive attitudes" while building a road block). A battle of wills follows and a "tight little island" gets tighter still as the government reluctantly moves in and the citizenry are forced to seek out ingenious places to stash their loot.

MacKenzie's book was based on the real-life wrecking of the S.S. Politician off Eriskay in 1941 and his screenplay with Angus MacPhail (an Ealing regular who worked with Alfred Hitchcock on Spellbound, 1945, and The Wrong Man, 1956) does much to streamline the novel, condensing the fictional twin isles of Great and Little Todday into one and cutting out much of its Gaelic language and religious conflict sub-plots. The result is a gently amusing caper in which Radford is a definite comic highlight, with many puns to be had on the name of the distilled drop in question, perhaps the best being an early scene in which an elderly man dies of grief for the want of a drink, whereupon a gathering of friends and well-wishers assemble to "mourn a departed spirit". Joan Greenwood is the only other big name on show from south of the border, with the rest of the cast comprised of Scottish character actors such as Gordon Jackson and the formidably bearded James Robertson Justice (below), with native folk serving as extras and advising on verisimilitude. 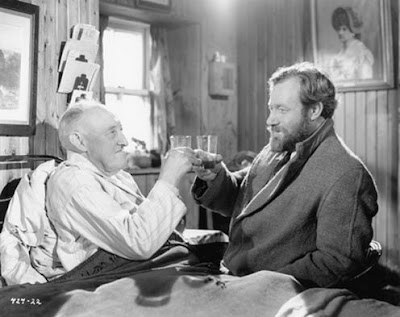 Rather like the same year's Passport To Pimlico, Mackendrick's comedy is another Ealing wish-fulfilment fantasy fable about deliverance from the hardship and rationing of the post-war years. It also follows producer Michael Balcon's favourite theme that anyone can become a crook when driven to it by the right circumstances, as demonstrated later in The Lavender Hill Mob (1951) and Mackendrick's own The Ladykillers (1955). Balcon was apparently unhappy with the director's original cut, however, and annoyed at the film's location shoot over-running because of turbulent weather and had it re-edited by the admirable Charles Crichton, who, it must be said, did a sterling job but for the oddly downbeat and moralising ending, which states that the islanders soon ran out of the good stuff once more and returned to their misery. Surely the teetotallers can't win in a film that is otherwise a staunch and unabashed celebration of the joys of a nice wee dram?! Mackendrick would return to the Scottish coast for another Ealing adventure in 1954 with The Maggie while Mackenzie would write a Cold War sequel to his novel in 1957 entitled Rockets Galore! in which a missile base is built on Todday to the chagrin of the locals, which itself was filmed to less acclaim by Michael Relph shortly after.
Posted by Joe at 19:24