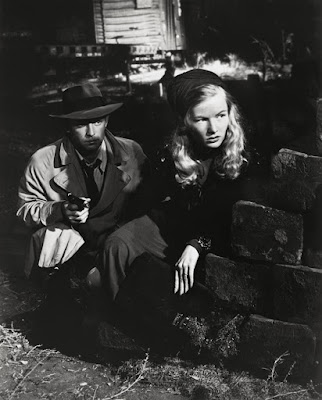 A little more Veronica Lake from the same year in the first of her popular pairings with Alan Ladd, followed by The Glass Key (1942) and The Blue Dahlia (1946), an Americanisation of Graham Greene's thriller A Gun For Sale (1936) from director Frank Tuttle and writers W.R. Burnett and Albert Maltz.

In his breakthrough performance, Ladd stars as Raven, an embittered hitman forced to turn fugitive when he is paid for a job in marked bills, prompting him to seek revenge on his double-crossing contacts while evading the cops. Raven is described by Greene as, "made by hatred; it had constructed him into this thin smoky murderous figure in the rain, hunted and ugly. His mother had borne him when his father was in gaol, and six years later when his father was hanged for another crime, she cut her own throat with a kitchen knife; afterwards there had been no home. He had never felt the least tenderness for anyone". Greene's protagonist served as the prototype for Pinkie Brown in Brighton Rock (1938) and sports a grotesque hair-lip that warps his features (and by extension his moral outlook), presenting him with a serious professional handicap, especially when he spends much of the story on the run from the authorities with coverage of his sensational escape splashed across the front page of every newspaper. Ladd's only problem, however, is a broken wrist and a history of violence at the hands of an abusive aunt and a reform school. He's as handsome as ever and it's hard to accept his total nihilistic withdrawal from society, sympathising only with alley cats as fellow self-imposed outsiders. Surely someone so good looking can't really have done all that badly by other people? This is just one of several problems with giving Greene's grotty little revenge pulp the sanitising treatment. Instead of the pre-war European political assassination that rivals that of Austrian archduke Franz Ferdinand for significance in A Gun For Sale, Raven's opening assignment here is simply to take out a minor police informant in San Francisco. Similarly, when Lake's Ellen Graham is trussed up and imprisoned by portly villain Willard Gates (Laird Cregar), she is stowed away in an elegant closet rather than shoved unceremoniously up a boarding house chimney like her literary counterpart Anne. While Anne works as a chorus girl in a provincial Christmas pantomime, Ellen is a chanteuse and magician at a flash night club. The source is also hijacked somewhat for the delivery of a clumsy but timely pro-interventionist message: Gates and his employer Alvin Brewster (Tully Marshall), owner of Nitro Chemical, are preparing to sell poisonous gas to the Japanese, prompting Ellen to scold the previously indifferent Raven: "This war is everybody's business. Yours too." If only serial-Greene adapter Carol Reed (The Fallen Idol, 1948, The Third Man, 1949, and Our Man In Havana, 1959) had gotten his hands on it, we might have had something more remorselessly grim, a British noir along the lines of his own Odd Man Out (1947), the Boulting Brothers' Brighton Rock (1947) or Jules Dassin's Night & The City (1950). Greene himself said he didn't care for Tuttle's film and confessed himself mystified by the "strange intrusion" of a "girl conjurer" into the story but personally I found Lake's musical numbers a definite highlight, not least because of the bizarre dominatrix/angler outfit she sports in 'I've Got You'.

Still, for all those gripes, This Gun For Hire remains a supremely entertaining affair with two spanking hot leads, memorable bad guys (Marshall's ancient and dying Brewster especially) and some fine action set-ups, not least the shoot-out at the train yard and the gas mask scene, which is also in Greene's novella and presents a real gift for screenwriters as it's already a perfectly cinematic plot contrivance, designed to confuse.
Posted by Joe at 11:29