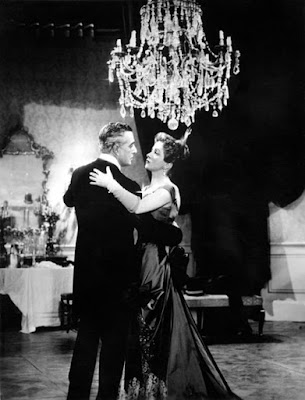 Time for a little change of pace, I feel. Here's the regal Danielle Darrieux as the titular belle with Vittorio De Sica (an accomplished actor as well as the celebrated director of Bicycle Thieves, 1948) playing her doomed lover, Baron Donati, in Max Ophüls' sumptuous adaptation of Louise Lévêque de Vilmorin's 1951 period novel. The author remains one of the few people ever to see Madame De... and take exception to it. American critic Andrew Sarris regularly campaigns for it as "the most perfect film ever made" and I certainly can't recall seeing a more exquisite piece of cinema, though perhaps Jean Vigo's L'Atalante (1934) runs it close. 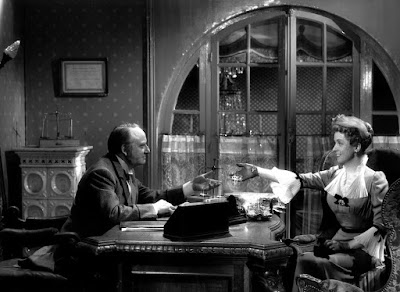 Set in the opulent surroundings of fin de siècle Parisian high society, a world of boundless luxury, the film's carefully constructed plot concerns its aristocratic heroine's decision to sell back a pair of diamond earrings gifted to her as a wedding present by her husband, a stern but loving general (Charles Boyer), in order to pay off some personal debts she'd rather keep private. The trinkets are then quietly resold to the general who passes them on to his mistress, who in turn pawns them in Constantinople to fund a gambling habit. There they are finally acquired by Italian diplomat Donati, who happens by chance to run into Madame de... at customs and falls in love with her without ever quite managing to catch her name. They begin an affair in the embassy ball rooms and restaurants of the French capital, which is initially tolerated but resented by the general, before matters come to a head and the two men take to the duelling field to settle the matter on a point of honour. 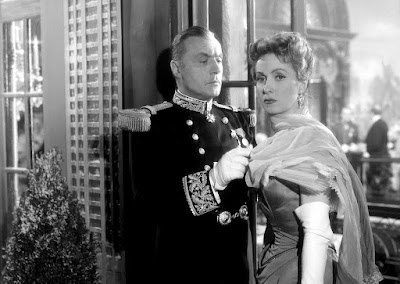 Coming in the middle of the German director's great purple patch towards the end of his life, which also produced Letter From An Unknown Woman (1948) with Joan Fontaine, La Ronde (1950), Le Plaisir (1951), a Guy de Maupassant compilation featuring Jean Gabin, and Lola Montès (1955), this tale of love, lovelessness and loss is exquisitely played by its leads, Boyer and Darrieux reuniting two decades on from their first pairing in Anatole Litvak's historical drama Mayerling (1936) and giving truly affecting performances. Boyer in particular is magnificent as a man forced to accept a role imposed upon him by his wayward wife that isn't necessarily true or fair. The rich emotional complexity in evidence here is as fine as all the silks, satins, furs and gemstones the General bestows upon his bride and Ophüls allows his actors every freedom, letting the action unfold naturally and trusting in the subtlety of his players as Christian Matras's camera glides, drifts and orbits around them like some lingering scullery maid. Stanley Kubrick famously noted that Ophüls' camera could "pass through walls" but this approach to shooting is no mere novelty and comes always at the service of mood, perhaps most clearly when Darrieux and De Sica are seen waltzing together and the camera's swoops and reels echo the intoxication of their movement, rallying against the stifling proprietaries and expectations of society. François Truffaut suggested in The Films In My Life (1978) that, "Ophüls was less interested in real things than in their reflections; he liked to film life indirectly, by ‘ricochet.’ For example the first treatment of Madame De…, rejected by the producers, planned that the story, which we all know, be seen entirely in mirrors and on the walls and ceiling."

Ophüls' heroine journeys from frivolous materialist to passionate woman to tragic victim with the passage of time and similarly the earrings themselves take on new layers of meaning and significance whenever fate intervenes to pass them on from one owner to the next. John Webster discussed the same phenomenon in The Duchess Of Malfi (1613), over three centuries earlier, when he wrote, "Diamonds are of most value, they say, that have past through most jewellers' hands" and perhaps Madame De... itself is acquiring a greater lustre as the world that created it falls away and disappears.
Posted by Joe at 17:11