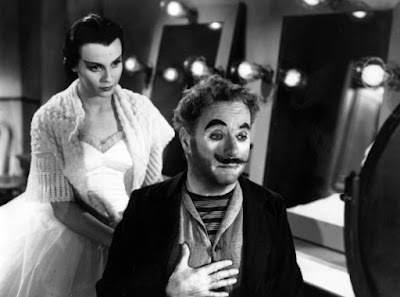 Charlie Chaplin had intended Limelight to be his final film, a closing statement on his own career, mortality and the fickle nature of fame. As it happened, he went on to make two more - A King In New York (1957) and A Countess In Hong Kong (1967), the latter a particular curiosity with Marlon Brando, Sophia Loren and Tippi Hedren among the cast - but Limelight is his real swansong and comes with more than a whiff of the vanity project about it. This nostalgic autobiographical melodrama is really classic Chaplin, in all of its maddening charm, humanity and unapologetic syrup.

Chaplin directs and stars as Calvero, "the tramp clown" (hint, hint), a former star of the London music halls of the late nineteenth century but a penniless alcoholic by the summer of 1914. Returning to his lodging house inebriated one afternoon, Calvero smells a gas leak and breaks into the ground floor flat of Terry (Claire Bloom), a desperate young girl attempting to commit suicide. Calvero rescues her and nurses her back to health, learning that she was once a ballerina but can no longer dance after failing to recover fully from rheumatic fever. However, a doctor suggests that Terry's condition is really psychosomatic and so Calvero puts her back on her feet and teaches her to walk again. Terry falls in love with her saviour but he rebuffs her, feeling she deserves to be with a younger man, and leaves to busk for a living. Terry returns to the ballet and triumphs while Calvero's comeback gig flounders. Later the pair are reunited and she wins him the part of a harlequin at the Empire Ballet under an alias. Once his true identity becomes known, a benefit performance is swiftly arranged in his honour, one last round of applause for a dying god.

Yes it's heavy-handed and leaves nothing unsaid (ironic for a silent comic) but Limelight is a touching and persuasive bit of business too. And while it may not be as searching a look behind the velvet curtains as, say, Tony Richardson's The Entertainer (1960), there are some deeply felt, true and occasionally bitter observations espoused here about the world and its myriad hardships and cruelties. Chaplin was no stranger to scandal after all and had encountered the best and worst in people over the course of his long and extraordinary career. He would soon receive another dose - on returning from a British tour promoting Limelight, Chaplin was told that he was no longer welcome in America because of his supposed communist sympathies, the country then caught up in the grip of paranoid McCarthyism, an occurrence that sparked his long-term estrangement from the US. He returned to pick up his only competitive Oscar 20 years later when Limelight was re-released, winning for best original score, but the rift was never truly healed. 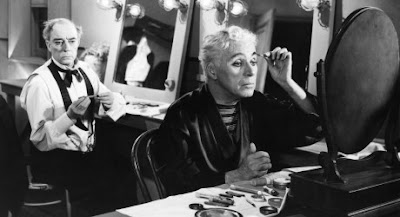 Aside from its subject matter and standing within the Chaplin canon, Limelight is perhaps best known for featuring the only ever on screen pairing of Charlot with his great silent rival Buster Keaton (above). Rather like Keaton's brief cameo in Billy Wilder's Sunset Boulevard (1950), the part was written in as a kindness to the Great Stone Face who had fallen on hard times after a messy divorce but he's superb on stage with Chaplin playing an absent-minded pianist struggling with his sheet music. Chaplin's own performance is as expressive and graceful as ever, Bloom is extremely endearing in her first silver screen appearance and Nigel Bruce (Basil Rathbone's Dr Watson for many years) is amusing as stuffy patron Mr Poston. Many Chaplin children also appear in small parts, most notably Charlie's son Sydney as Neville, Terry's lost love, and the film also serves as a useful guide to the sort of material the star was performing much earlier in his career (he first played a flea circus ringmaster in the unfinished 1919 short, The Professor, for instance). If the whole affair weren't quite so damned earnest and self-pitying I'd say it was a masterpiece.
Posted by Joe at 18:12