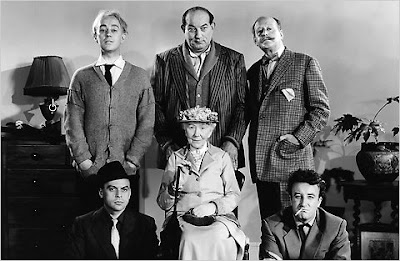 Alexander Mackendrick's pitch-black comedy stands as one of the jewels in Ealing's crown and is just possibly the greatest of all British films. Based on a masterly script by William Rose (an American, of all things), The Ladykillers concerns elderly widow Mrs Wilberforce (Katie Johnson), a sweet old biddy who lives alone in a bomb-damaged house in darkest King's Cross, a ramshackle residence cluttered with doilies, fussy floral wallpaper, parrots and pictures hanging askew. When she takes a new lodger in the person of the outwardly charming but in fact really rather sinister Professor Marcus (Alec Guinness), Mrs Wilberforce finds her quiet existence suddenly turned as lopsided as her home. Claiming to be rehearsing with the other members of his string quintet upstairs, the Professor is actually plotting a bullion heist with a criminal gang, a ragtag bunch of riff-raff comprised of Herbert Lom, Peter Sellers, Cecil Parker and the hulking Danny Green. The job goes off without a hitch (sort of...) but when the redoubtable Mrs Wilberforce learns the truth and insists that the Professor and his mob hand themselves over to the police, there seems to be only one solution to their predicament... 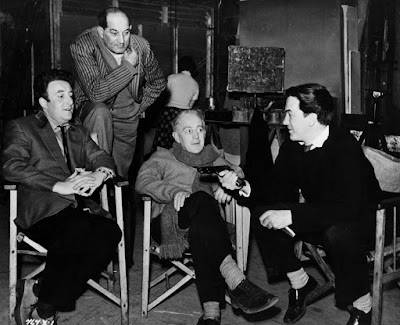 Rather than try and analyse this most glorious of capers, I thought I'd quote Mackendrick on the subject at length from his 2004 book On Film-Making, which offers the best reading of The Ladykillers you could possibly wish for, straight from the horse's mouth:

“The fable of The Ladykillers is a comic and ironic joke about the condition of post-war England. After the war, the country was going through a kind of quiet, typically British but nevertheless historically fundamental revolution. Though few people were prepared to face up to it, the great days of the Empire were gone forever. British society was shattered with the same kind of conflicts appearing in many other countries: an impoverished and disillusioned upper class, a brutalised working class, juvenile delinquency among the mods and rockers, an influx of foreign and potentially criminal elements, and a collapse of ‘intellectual’ leadership. All of these threatened the stability of the national character.
Though at no time did Bill Rose or I ever spell this out, look at the characters in the film. The Major (Parker), a conman, is a caricature of the decadent military ruling class. One Round (Green) is the oafish representative of the British masses. Harry (Sellers) is the spiv, the worthless younger generation. Louis (Lom) is the dangerously unassimilated foreigner. They are a composite cartoon of Britain's corruption. The tiny figure of Mrs Wilberforce (Wilberforce was the name of the 19th century idealist who called for the abolition of slavery) is plainly a much diminished Britannia. Her house is in a cul-de-sac. Shabby and cluttered with memories of the days when Britain's navy ruled the world and captains gallantly stayed on the bridge as their ship went down, her house is structurally unsound. Dwarfed by the grim landscape of railway yards and screaming express trains, it is Edwardian England, an anachronism in the contemporary world.
Bill Rose's sentimental hope for the country that he and I saw through fond but sceptical eyes was that it might still, against all logic, survive its enemies. A theme, a message of sorts, one that I felt very attached to. But one that it took quite some time for me to consciously recognise and appreciate".

An acute and thoughtful allegorical state-of-the-nation address then as well as a cracking comedy. As expertly played as the villains here are, it's the remarkable Katie Johnson, then aged 76, who really deserves the plaudits. Mrs Wilberforce violently attacking her clanking plumbing with a mallet in order to squeeze out enough water to fill the kettle is a definite highlight for her sudden and unexpected physicality but it's her dignified bearing, fine diction and unwavering moral compass that make her such an astonishing force of nature. Watch out also for an early appearance from Carry On star Frankie Howerd as an aggrieved barrow boy and, needless to say, give the Coen Brother's ill-advised 2004 remake short shrift - despite Tom Hank's best efforts in the Guinness part, it's entirely unnecessary and their worst film by some way. Irish comedian Graham Linehan recently scripted a stage version of The Ladykillers for London's West End starring Peter Capaldi that might fare better but, really, how could you not plump for the original?
Posted by Joe at 10:39