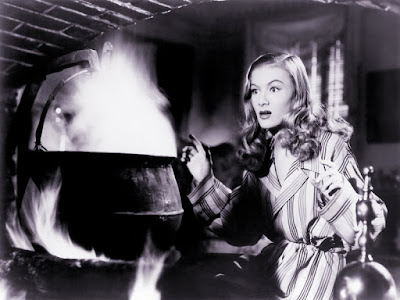 Here's a sweet supernatural screwball comedy starring an adorable Veronica Lake as Jennifer, a 17th century witch burned at the stake and imprisoned within a tree along with her wicked father Daniel (Cecil Kellaway) by Salem Puritans led by Jonathan Wooley (Fredric March). Before she dies, Jennifer places a curse on Wooley damning all of his male heirs to endure unhappy love lives. Centuries later, a bolt of lightning strikes the tree and frees Jennifer and Daniel into the present day, whereupon she seeks out the modern ancestor of her denouncer, the soon-to-be-married gubernatorial candidate Wallace Wooley (March), and tries to make him fall in love with her in order to torment the family further. However, when Jennifer is inadvertently fed her own love potion by mistake, the situation runs out of control, the pair get hitched and she realises she must protect her husband from his new father-in-law, still unrepentantly evil and out for revenge.
Frenchman René Clair - a dab hand with comedy and the director of À Nous La Liberté (1931), a major influence on Chaplin's Modern Times (1936) - made this fun little outing his second Hollywood picture, after The Flame Of New Orleans(1941) with Marlene Dietrich, but fell out with producer Preston Sturges during shooting over creative differences. Sturges' presence is still evident throughout, however, as many of his stock company appear on the cast list, most prominently Lake and Robert Warwick as the scheming pater of Wally's intended, Estelle (Susan Hayward). The idea that Jennifer uses a spell to manipulate the election result in Wally's favour, a plot point that passes unquestioned, also seems to chime nicely with the great director's sense of humour. Sturges regular Joel McCrea declined to be reunited with his notoriously difficult Sullivan's Travels (1941) co-star, however, arguing that, "Life's too short for two films with Veronica Lake". Though no masterpiece, I Married A Witch seems an obvious inspiration for the later Broadway adaptation Bell, Book & Candle (1958) with Jimmy Stewart and Kim Novak and the popular Bewitched television sitcom (1964-72) and makes for a cute vehicle for Lake. It also boasts some spirited straight performances from Oscar winners March and Hayward and is rather similar in tone to Frank Capra's kookily sinister Arsenic & Old Lace (1944), all flying taxi cabs and witchy spirits taking the form of wisps of smoke and getting sozzled by hiding out in rum bottles. Speaking of witch hunts, the film's story was taken from Thorne Smith's unfinished novel The Passionate Witch (completed by Norman H. Matson and published in 1941 after Smith's death), with a script worked on by Dalton Trumbo, who would later become one of the Hollywood Ten when he was blacklisted in 1947 for refusing to name names to Senator McCarthy's House Un-American Activities Committee.
Posted by Joe at 09:48