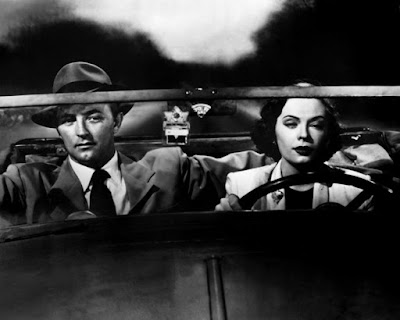 After the combustible chemistry they demonstrated in Jacques Tourner's ultimate noir Out Of The Past (1947), audiences were hungry for a second pairing of stars Robert Mitchum and Jane Greer. Their wish was only granted, however, when Mitchum's original co-star on The Big Steal, Lizabeth Scott, dropped out following his arrest for marijuana possession, fearing her image might be tarnished by association. Greer was called in, in spite of objections from a besotted Howard Hughes, when no other actress on the RKO lot would take the part and the result was this light-hearted chase caper through rural Mexico, again based on a script by novelist "Geoffrey Homes" (AKA Daniel Mainwaring), this time adapting Richard Wormser's short story 'The Road To Carmichael's' with Gerald Drayson Adams. Mitchum plays US army lieutenant Duke Halliday, on the run from his superior, Captain Vincent Blake (genre regular William Bendix), after being framed for the theft of $300,000 from the payroll. Pursuing Jim Fiske (Patric Knowles), the real stick-up man, all the way to Mexico, Halliday encounters Fiske's angry girlfriend Joan Graham (Greer), who is also after the slippery spiv over some "borrowed" funds of her own. The duo reluctantly join forces to track him down, with Blake not far behind. 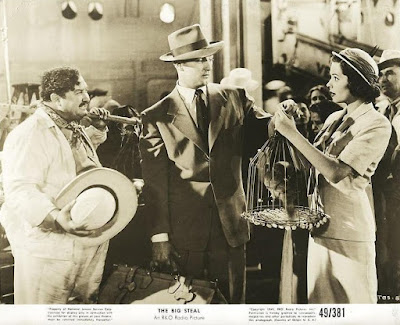 Naturally, The Big Steal isn't the unquestionable classic its predecessor was but Mitchum and the tough, capable Greer spark off each other nicely once again and there's an enjoyably relaxed, comic tone to proceedings. Director Don Siegel, who would of course go on to shoot Dirty Harry (1971), demonstrates a sharp eye for the lively sights and sounds of the Mexican countryside (accentuated in the 1991 colourised version I saw), shading the background with herds of goats, outraged gas station attendants and sentimental road menders. Stereotypes perhaps, but there's also a credible, rounded Mexican character here in the person of Inspector-General Ortega, played by former silent heartthrob Ramón Novarro, sadly better known these days for his brutal murder at the hands of two rent boys in 1968, who choked him to death with an art deco dildo, than for his earlier career as a Latin lover and the first screen Ben Hur. Ortega makes for a shrewd presence, never for a second convinced by Mitchum's false identity and touchingly proud of his gradually improving English. The plot may not be especially original (it actually echoes This Gun For Hire, 1942, in several respects) but there's a great deal of fun to be had here, not least because of the smoking leads, a wild car chase making full use of some frantic back projection and a trio of strong supporting performs courtesy of the always reliable Bendix, Novarro and John Qualen, the latter an eccentric "fence".
Posted by Joe at 19:36