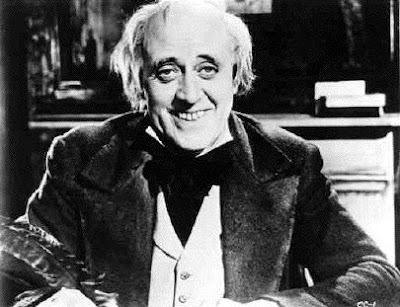 A very merry Christmas to all my readers - both of you - and here's an early gift, my favourite of the seemingly infinite number of screen adaptations of Charles Dickens' most beloved tale.

Composer Bernard Herrmann once observed, "Audiences are like children; they don't mind hearing the same story over and over again. It's how you tell it." The endless reworkings of A Christmas Carol (1843) appear to bear out this notion perfectly. Brian Desmond Hurst's spin on the old yarn really is a gem though - authentically spooky thanks to C.M. Pennington's Richard's gloomy cinematography and extremely faithful in tone to its source ("There's more of gravy than of grave about you"), filled with the sad experience of its author but tempered with a sympathetic pro-welfare state message. As much as I like the Muppets, this is most certainly the version for me. Alastair Sim makes for a marvellous Ebeneezer Scrooge - fearsome early on and exuberantly joyful at the close - and there's fine support from Mervyn Johns as a charming Bob Cratchit, Michael Hordern as the ghostly Jacob Marley, Kathleen Harrison as Scrooge's Cockney charwoman and Jack Warner as roguish embezzler Mr Jorkin. Look out too for George Cole as young Ebeneezer, Ernest Thesiger as an undertaker, Miles Malleson as the wry pedlar Old Joe, Hattie Jacques as Mrs Fezziwig and Patrick Macnee as young Marley.


As essential a Yuletide movie as It's A Wonderful Life (1946), Miracle On 34th Street (1947), A Christmas Story (1983) or Bad Santa (2003), go for this baby every time (though perhaps not the sickly colourised print from 1989) and, whatever else you do, remember to steer well clear of the Patrick Stewart and Kelsey Grammer TV movie travesties. Those really are frightening.
Posted by Joe at 21:11