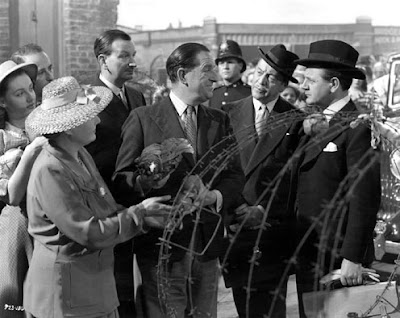 I just received a nice new Ealing box set for Christmas courtesy of my dear old Dad and the first one we plumped for was this smart satire from prolific studio writer T.E.B. Clarke and first time director Henry Cornelius about the discovery of a treasure trove of jewels and gold coins belonging to the last Duke of Burgundy near the site of an unexploded bomb in darkest Pimlico, London. Amongst this stash is a royal charter from Edward IV of England bequeathing the area to the fleeing ruler after he was presumed dead following the Battle of Nancy in 1477. The authentication of this parchment by Margaret Rutherford’s dotty academic Professor Hatton-Jones leads the locals to declare the Miramont Place estate a free territory independent of the United Kingdom, whereupon the locals run riot with glee (“Blimey! I’m a foreigner!”) and the moustaches of Whitehall begin to twitch and bristle with vexation. 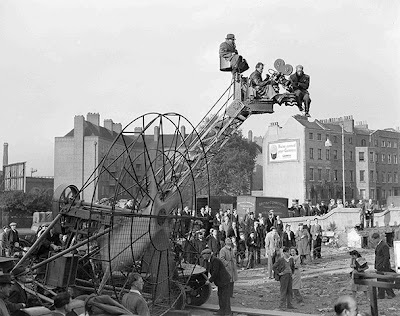 A fine example of producer Michael Balcon’s “mild revolution”, Passport To Pimlico stands as a comic fantasy of liberation from the necessary restrictions imposed on Brits living in tenement rubble and brick dust by the post-war austerity Labour government of the day. There’s a palpable sense of fear detectable here about a return to the horrors of evacuations, conflict and the siege mentality of the war years, still so fresh in the memory, but also a nostalgic yearning for a revival of the famous “Dunkirk spirit” the British people pulled together to demonstrate under those same dark skies. In 1949 the ration book was still king and many were beginning to feel exasperated by the ongoing scarcity and want and dreamed of deliverance from the deprivation they encountered every day, a mood Passport To Pimlico captures perfectly and is typified by the scene in which Stanley Holloway’s Arthur Pemberton proposes a new children’s playground be built nearby and is met with a frosty response from the chair of the local council: “This borough is in no position to finance daydreams”. Clarke’s script is always quick to set idealism crashing against the rocks of practical reality and the story actually unfolds as a logical examination of the likely problems a new microstate such as Burgundy might encounter – the immediate appearance of black marketeers (the rogue fishmonger purporting to be selling “Danish” eels at extortionate rates), the festivals of bureaucracy taking place at its borders and diplomatic wrangling in its corridors of power, a dependence on its neighbours for water and food supplies and the potential collapse of law and order (British manners and respect for rank are abruptly cast aside in the pub in favour of drinking and dancing). The result is an extremely satisfying enterainment and no doubt provided a welcome escape for contemporary audiences. 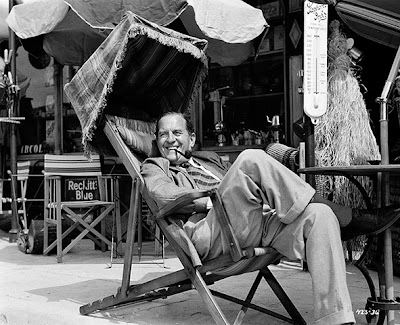 Balcon insisted his studio's films should tell stories "ripped from the headlines" and Clarke’s tale of the South London Burgundians was duly inspired by a news story he encountered during wartime concerning the pregnant Princess Juliana of the Netherlands, who went into labour with the country’s heir while living in exile in Canada, a turn of events that would have rendered the boy ineligible for the throne because he wasn't born on home soil. To remedy the situation, the maternity wing of the Canadian hospital in question was temporarily handed over to the Netherlands and Dutch law was appeased. Ingenious! Of the many highlights among a cast including Raymond Huntely, Hermione Baddeley, Sydney Tafler, Michael Horndern and a young Charles Hawtrey, it's great to see the return of Basil Radford and Naunton Wayne, Charters and Caldicott themselves, as representatives of the British government. The film also includes arguably the best pathetic fallacy joke of all time – the whole picture takes place during an unseasonal heat wave, which only ends when Burgundy is welcomed back into the UK, whereupon it immediately begins to rain.
Posted by Joe at 22:11