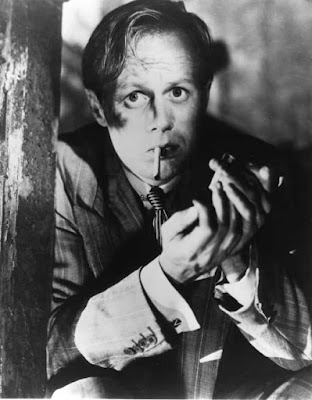 American hustler, confidence trickster and nightclub tout Harry Fabian (Richard Widmark) was a lifelong loser who came to London after the war with dreams of striking it rich and damn near made it. For one fleeting moment, he had it all right there in the palm of his hand. This one wasn't like the football pool's scam or the Birmingham greyhound track. This one was big.

A chance encounter with the Great Gregorious (Stanislaus Zbyszko), an ageing Greco-Roman wrestling champion and a purist disgusted by the fakery and choreography of the modern game, gives Fabian the idea that he could become a big shot promoter. But such a venture would require a solid backer and his bloated boss at the Silver Fox, Phil Nosseross (Francis L. Sullivan), may have one too many ulterior motives to be truly trustworthy, not least his jealousy towards Fabian over his ruthless wife Helen's (Googie Withers) wandering eye. The boy will also need to overcome the objections of another party, Gregorious's son Kristo (Herbert Lom), a shady fellow keen to modernise the sport into a more contrived, spectacular entertainment without losing the old man's love.

Director Jules Dassin was dispatched to a Britain still smouldering in the rubble and ruin of the Blitz to make Night & The City by Fox head Darryl F. Zanuck, who knew that Dassin was about to be blacklisted for his alleged Communist sympathies after fellow director Edward Dmytryk dropped his name to the House Un-American Activities Committee. Gene Tierney was sent along with him for this adaptation of Gerald Kersch's 1938 novel in order to get over a particularly bad break-up that had led Zanuck to believe her suicidal. It's perhaps this melancholy background that explains the resulting production's relentless pessimism and abiding gloom. Tierney's Mary Bristol, Fabian's doting girlfriend, is one of the few characters we are introduced to who is anything other than a crooked parasite in pursuit of their own interests. Dassin's London is a nightmarish underworld of squalor, poverty and desperation, its winding alleyways cloaked in expressionistic shadows, in which no one decent has a shilling to spare - an atmosphere no doubt reflecting the director's troubled state of mind at the time. Noir always deals in fatalism but rarely has the point been so unromantically made as in this account of the utterly pointless life and death of Harry Fabian. Czech hood Lom flicking his cigarette butt absently into the Thames after watching The Strangler (Mike Mazurki) polish off Fabian and dump his body in the water just says it all.

Widmark is fabulously energetic in the lead, his bony, taut face and staring eyes barely concealing Harry's frantic ambition. He spends much of the film running, darting away from hoodlums and into doorways and new scrapes and seems to be almost perennially sweating, refusing to surrender to the idea that he can't outrun death. It's hard to resist reading the character as a metaphor for Dassin's plight. Withers and Sullivan also make for a memorably frightful couple, he as beady and wearily knowing here as he was playing Jaggers in David Lean's remarkable Great Expectations (1946). Full-time henchman Mazurki is also well cast as a boorish rival wrestler (a nod to his earlier career) and his bout with the older Zbyszko (the Pole had also been a professional Greco-Roman brawler, see below) is one of the most memorable cinematic sporting contests I can recall. 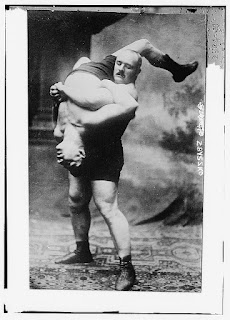 Dassin may have been discarded by Hollywood because of his political affiliations but he continued to work and followed Night & The City by relocating to France and making Rififi (1955), possibly the greatest of all bank heist capers. As sweet a kiss-off as they come.
Posted by Joe at 10:36