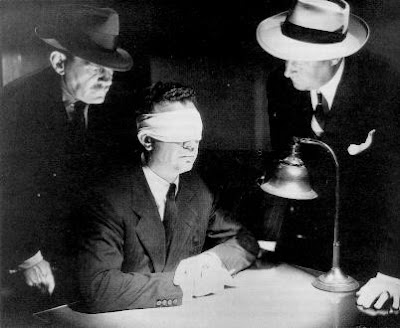 Dick Powell as Raymond Chandler's celebrated private eye Philip Marlowe, temporarily blinded by gun smoke and under suspicion from the cops, in Edward Dmytryk's excellent adaptation of the author's 1940 novel Farewell, My Lovely. The former Warner Brothers musical star tends to divide opinion in the role but, personally, I love his light comic touch and whimsical, perpetually amused take, perfect for smirking through Chandler's witty dialogue. A scene in which Marlowe strikes a match off the cold marble buttocks of a statue of Cupid to light his cigarette before grinning wryly up into its eyes in anticipation of annoyance sums the character up beautifully. Powell may handle Marlowe pretty differently to Humphrey Bogart in The Big Sleep (1946) - he's no hard man but then Marlowe's no Mike Hammer - though he did get there first and there's surely plenty of room for both interpretations. Some of Powell's lines are unbeatable, however: "'OK Marlowe,' I said to myself. 'You're a tough guy. You've been sapped twice, choked, beaten silly with a gun, shot in the arm until you're crazy as a couple of waltzing mice. Now let's see you do something really tough - like putting your pants on.'"

Powell would be rewarded for his brilliance in 1949 when he was granted his own radio series on NBC, Richard Diamond, Private Detective. The show enabled Powell to combine his talents, delivering snappy dialogue between mysteries and crooning a song to his devoted secretary at the end of each episode , making Diamond the original singing detective. 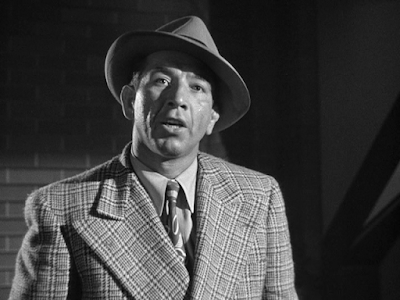 But back to Murder My Sweet. Dmytryk's leading man is by no means let down by his supporting players in this superlative tale of missing dames, extortion, phoney stick-ups, trophy wives and jade MacGuffins. Mike Mazurki (above) is unforgettable as hulking simpleton Moose Malloy in his best known role, a character described by Chandler as, "a big man not more than six feet five inches tall and not wider than a beer truck.. He wore a shaggy borsalino hat, a rough grey sports coat with white golf balls on it for buttons, a brown shirt, a yellow tie, pleated grey flannel slacks and alligator shoes with white explosions on the toes... Even on Central Avenue, not the quietest street in the world, he looked about as inconspicuous as a tarantula in a slice of angel food."

Brilliant stuff and Mazurki gives life to this creature so magnificently that his Malloy ends up as immortal a screen monster as King Kong or Boris Karloff's in Frankenstein (1931), two more big brutes in search of love. Anne Shirley is also sweet as the distrustful Ann Grayle while Claire Trevor makes for a fine femme fatale, seductive, street smart and entirely believable with a pistol in her hands during the climactic beach house scene. It's easy to imagine her clipped delivery and sharp manner providing the inspiration for Julianne Moore's avant-garde artist Maude in The Big Lebowski (1998), just as Ben Gazzara's Jackie Treehorn in the same film seems to echo Otto Kruger's turn as quack blackmailer Jules Amthor here. The surreal dream sequence Marlowe endures after being knocked out and doped seems to have provided a further cue for the Coen Brothers. Another postmodern spin on Chandler's mystery came in 2009 with the launch of HBO's inspired comedy series Bored To Death, in which Jason Schwartzman's depressed writer Jonathan Ames rediscovers the novel and sets out to become a detective himself (unlicensed) like a latter day Don Quixote, with similarly disastrous results.
Posted by Joe at 15:49